TV View: BBC happy to ignore the (British) elephant in the room 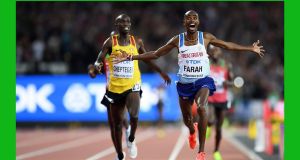 There are cheerleaders in every sport but not all carry pompoms. It seems that the British Broadcasting Corporation (BBC) has decided to reserve all critical analysis in relation to any controversy, past or present, drugs or otherwise, for ‘Johnny Foreigner’ when it comes to the World Athletics Championships in London.

There is a latent jingoism that’s front and centre when it comes to dear old Auntie and its coverage of the world of athletics, so tut-tutting about impartiality or restraint when there’s a red, white and blue filter on every screen image is a little naïve. They’re entitled to be bullish.

Accepting the partisan nature and the cloying emotional sentiment invested in the glory of the land of hope is one thing but the BBC ought to have a professional journalistic responsibility not to run a mile from discussing uncomfortable issues pertaining to one of their own.

Farah’s coach Alberto Salazar is currently being investigated as there have been allegations leaked in a 329-page report by the US anti-doping agency (Usada) into Salazar’s Nike Oregon Project training group.

The report alleges Salazar abused prescription medicines and used prohibited infusions to boost testosterone levels of his athletes. It also claims UK Athletics ignored warnings from a doctor that Farah was receiving potentially harmful treatments from his coach on moving to the US to join Salazar’s training group (2010).

Usada’s investigation continues but Farah and Salazar have always vehemently denied any wrongdoing. No one expects this to be woven into the race commentary but it’s germane to any pre- or post-race discussion, especially as Farah declined to do any media interviews prior to the 10,000 metres final to address the accusations.

Instead the task of defence fell to Neil Black, the UK Athletics Performance Director, who claimed he had looked in the eyes of Farah and Salazar and asserted that they weren’t cheats. He may be employing the black arts, so to speak, but a more likely suspicion is that it’s another mumbo-jumbo assertion drawn from the lexicon of sporting bureaucrats.

The post-race discourse relating to Ayana’s stunning triumph in the women’s 10,000 metres was also oddly incongruous given the circumstances; her first 10,000m race of an injury-plagued season saw her decimate a field of the best athletes in the world by a margin of 46 seconds.

This comes a matter of days after the Guardian newspaper ran an article by Martha Kelner under the headline, ‘Inside the doping hotspot of Ethiopia: dodgy testing and EPO over the counter’.

The allegations made in the article are eye-opening but it should be stated that there is no correlation whatsoever between Ayana’s triumph and its contents other than that the issues raised would merit some reference in any middle distance running discussion. To pick at one strand might have unravelled others and the BBC weren’t willing to take that chance.

But the Beeb had no problem fixing Justin Gatlin in their crosshairs. A twice-banned drugs cheat ruins Usain Bolt’s swansong championship appearance by winning the 100-metres title. The crowd bayed at and booed the villain; the BBC verbally and pictorially ignored the winner to focus on Bolt, exuding a moral righteousness as if adopting a tone from those in the stadium.

The BBC didn’t contemplate for one instant that Gatlin might win and so Steve Cram and his buddies were at a loss for words; well, until he had a chance to arrange his thoughts and have them beamed into the Twittersphere by BBC5 live.

The gist of his contribution on Gatlin’s triumph was that the London crowd were perfectly entitled to boo the American, that the sprinter’s primary fame is for being a drugs cheat and that he must accept and understand it when people articulate their displeasure.

No critical analysis of either Farah or Ayana has turned the BBC coverage into a ‘fawnzine’.

So ethics are to be decided by a public vote, sport’s version of reality television, a popularity contest defined under narrow parameters, where nationality is key and as long as the elephant is prepared to sit quietly in the corner of the room, there is no need to reference its presence, or think about it. It’s the modern way, live in the moment.