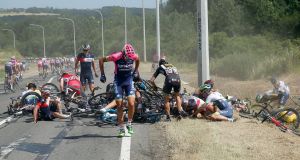 Riders collecting themselves after a crash during a stage of the Tour de France. Photograph: Doug Pensinger/Getty Images

We were somewhere between the first entrance to Djouce Wood and the last steep downhill stretch onto Old Long Hill Road when the rest of the cycling season suddenly flashed inside the frightened whites of my own eyes. Right here, right now, it’s all over Baby Blue.

Maybe it was the colour of the sun cut flat on the only dry evening of the week, or something like that, which briefly blinded the sight of the loose chippings now very loosely scattered on the road surface below and which instantly demanded all of my amateur bike-handling skills to avoid our violent embrace. With nothing between my skin and their crumpled shrapnel-like wounding but a jersey and shorts the width of one-ply toilet tissue there could only be one loser. The helmet might have proven redundant.

Some of us have been riding these hilly back roads around Enniskerry for many years and well used to Wicklow County Council playing their game of risk with this sometimes lethally dangerous manner of road resurfacing; others might not be so forewarned. Typically marked in advance with nothing more than a small orange sign displaying a car spraying loose chippings from its wheels, the safety concerns of the cyclist often seems redundant too, but that’s for us to worry about, isn’t it?

After a few days of rain these loose chippings like to huddle their threat in more brilliant disguise. If you’re lucky, which believe me I was, you might ride away with nothing more than a dislocated left thumb, still not properly healed from the last time, to add to other small souvenirs from those moments my bike suddenly fell from under me, or indeed over me: six steel screws and a five-inch titanium bar where my left collarbone used to be; a piece of bone floating beneath my left kneecap; what looks like a fresh bite mark down the back of my right calf muscle. And I go cycling for the sheer pleasure of it.

For those who actually race their bikes for a living such risks are and always will be heaped beyond any reasonable doubt. A fall is all part of the business, same as it is for jockeys, skateboarders and surfers, only typically at higher speeds and onto harder surfaces.

“Every rider has a bad day at the Tour,” Dan Martin told me, before the start of the 2018 Tour de France. “It just depends on whose bad day is the least bad.” By that he also meant who crashes the least, because barring a freaky clean race, there will be blood spilled by every rider before they reach Paris.

This was the year after Martin crashed on stage 9 of the Tour, the 181km from Nantua to Chambéry, accidentally taken down by Richie Porte on the wet descent from the Mont du Chat, not realising he’d fractured two vertebrae in the process. Martin rode on, unable to walk between stages, still finishing sixth overall in the general classification.

In that 2018 Tour, two days after winning stage 6 into Mûr-de-Bretagne, he crashed again at near top speed with 17km to go on stage 8, losing 1:16 to the peloton and most of his podium rivals. “There’s nothing broken but I’m ripped to pieces,” he said. “I landed on my back but I bounce well.” For the rest of that Tour he could be heard screaming in the shower of his team bus, and still he finished eighth overall.

Against that backdrop Martin’s crash at the Critérium du Dauphiné, two weeks out for this year’s Tour, might appear perfectly normal (he fractured another bone in his back) only it isn’t: it’s just one of a sudden spate of crashes which marred the Dauphiné, the Vuelta a Burgos, the Tour of Poland, Il Lombardia and the Tour de Wallonie – essentially all the main professional races since the UCI calendar resumed at the start of August.

Martin considers himself “a quick healer” and lucky he still gets to start the 2020 Tour; others weren’t so lucky, especially not Steven Kruijswijk, the Jumbo-Visma rider also taken down in the Dauphiné, and banged up his team-mate Primož Roglic. They already lost Gijs Leemreize to a severed finger in the Vuelta a Burgos, with Dylan Groenewegen out with a fractured collarbone and an internal suspension after that hideous crash into Fabio Jakobsen of Deceuninck-QuickStep in the Tour of Poland. The sight of Remco Evenepoel crashing into the ravine on the descent of Muro di Sormano in Il Lombardia wasn’t pretty viewing either.

Tom Dumoulin, another Tour contender with Jumbo-Visma, described the descent of the Col de Plan Bois in the Dauphiné as a “disgrace”, all of which is why the 2020 edition of the Tour de France is already being dubbed by most riders as the Tour de Fear.

This is nothing whatsoever to do with uncertainty of the race fate around Covid-19. Their fear is twofold: with only 28 days of race practice and conditioning since the season restarted after the lockdown, all 176 riders from each the 22 teams will be understandably that bit more eager and anxious about race positioning, which doesn’t always auger well. The unconventionally mountainous route, visiting all five of France’s ranges, including 29 categorised climbs and five summit finishes, also amounts to 58,000m of net uphill climbing, the highest in Tour history (roughly the equivalent of riding up Mount Everest six and half times).

Which riders, as Isaac Newton once discovered, must also come down, and given the greater risk of unfavourable weather and road conditions in September, those five mountain ranges are looking a lot more fearful than they might have in July.

The descent of the Col de Turini in Sunday’s stage 2 has already being singled for its questionable road surface, especially when these opening stages have riders on the rivet, the old expression of being forward on the saddle while riding flat out, and it seems much of this year’s Tour will have them on the edge of their bicycle rims too.

The UCI, the governing body of world cycling, has responded to this spate of recent crashes by saying it will initiate “far-reaching reform of the safety conditions” of future races, which for now sounds like a perfectly cosmetic exercise ahead of a Tour poised for some violent embraces between rider and road.