Tipping Point: How bored do you have to be to think Ironman is a good idea? 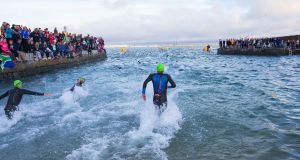 Last Sunday morning I watched some of the Dun Laoghaire Ironman. There was no choice. Road closures meant effective house arrest for four hours. And as competitors cycled past one major question kept nagging – just how bored do you have to be to think Ironman is a good idea?

Obviously that’s not the intended reaction. Watching a couple of thousand people cycle 56 miles of the Wicklow mountains, having already swum over a mile across Dublin Bay, and with 13 miles of a run still awaiting them, is meant to be an invitation to awe.

Maybe the few elite professionals in front might have conjured that. But they’d long since gone left in their wake a large majority of it seemed mostly middle-aged men sweating out their neuroses.

Almost without exception they looked shattered. Having already swum across a shipping lane, and with the Sally Gap still to be climbed, presuming on signs of happy joie de vivre was obviously presuming a lot. But this was misery. Happier looking cyclists retreated from Mons.

It was morbidly fascinating to look at: tape, bandages and all manner of ‘ping’ machines strapped to a sweaty mass of disconsolate humanity. Some bodies looked like they were being held together by plasters and the grim resolve to parade their affluence.

Rather than triumphs of the Corinthian sporting spirit, extreme sports events like Triathlon are really a reflection of prosperity. Not so much in terms of expensive bling as being able to afford the time and energy to prepare.

The amount of hours invested in being able to physically consider these events must be enormous. This is far from a health-maintaining casual jog around the block. This requires dedication of a sort most of us who fill our days with fripperies like scraping a living or raising families simply can’t fit in.

This was only a ‘70.3’ event as well. That’s a half Ironman, a sort of limp feel of the real deal that’s twice the length. And there are Triathlon varieties like the Double-Ironman and the Deca-Ironman. By extreme sport standard, Dun Laoghaire barely registered as a tremor on the periodic table.

And of course if that’s what you want to do then good luck. It’s certainly on-trend as part of the remorseless rise in popularity of events that make marathons old hat and turn otherwise sane people into obsessives pushing their bodies and minds to breaking point as some sort of ‘goal’.

That’s part of the jargon. There’s lot of self-absorbed cod-Californian balls like that. Lots of challenges, overcoming your limits and exploring the real you which presumably will be different from everyone else if you puke your guts out on the side of the road.

Colour me dubious about all of it because half an hour examining anguished middle-aged amateurism indicated a pursuit that isn’t so much about exercise as an existential cry for help.

Because at this point it’s pretty clear the last thing extreme sports are about is healthy exercise.

Punishing fitness regimes of the sort required to take part in Triathlons are what keep physiotherapists in second holiday homes. They also maintain the rampant profitability of the joint-replacement industry.

Recent reports point to the bleedin’ obvious about too much exercise being as bad for you as too little. There’s consensus that fitness advantages are negligible after an hour as well as plenty evidence to suggest extreme activities put undue pressure on the heart in particular.

One US study of more than nine million Triathlon participants over three decades found the chance of death and cardiac arrest for middle-aged adults was higher than the general population including those who run marathons.

During the study period 135 died suddenly or had a heart attack. On average the victims were 47 years old – 85 per cent were male. Precisely it seems the main demographic traipsing their way around South Dublin and North Wicklow last week.

Sure they’re best able to afford it. They’re probably also best able to loudly justify it with bunk about stress-busting. And never underestimate the narcissism of bored middle-aged men juggling both self-satisfaction and a desire to cling on to fading youth.

But if health is the excuse any explanation is surely part of a deeper psychosis, one it has been argued that is rooted in a desperate and very modern need to regain control over ever more frantic and uncertain lives.

You can see the logic. Asking most professional types what they do, or how good they are at it, means standing back for a three-minute answer about bosses, clients, office bitching, the value of the pound and whether or not Trump’s going to blow up the world. It’s life as a neurotic political slalom.

And since there’s still a caveman hard-drive among many men in particular, the straightforward attraction of a physical task involving concrete objectives and a yes or no conclusion as to whether or not you’re successful is obvious.

The size of the house or the car might be linked to modern savvy but there’s still a link between old fashioned physical accomplishment and the extent of the male ego. It’s even better if the tough-guy bit involves Instagram information about tapered anaerobic dietary consumption levels and muscles.

However this stuff comes dressed up in cant about health can’t disguise how so much of it betrays a terrible anxiety. No one’s immune to that. But not everyone’s bored enough to think extreme sports are an answer.

And watching Ironman it was hard not to consider how better directed all this white-collar angst could be if it was pointed towards goals that are kind, constructive or even creative rather than something so depressingly egocentric.

1 Ferrari’s Charles Leclerc ‘will not take the knee’ before Austria GP
2 Monica Seles: The warrior queen who could have been the best ever
3 Serpentine stays on from the front to steal Epsom Derby for Aidan O’Brien
4 Séamus Power huffs and puffs as Wolff blows the door down in Detroit
5 Glorious Greenwood as Man United thrash Bournemouth
Real news has value SUBSCRIBE
Here is your handy guide to sport on television this week

Ferrari’s Charles Leclerc ‘will not take the knee’ before Austria GP 13:31
Séamus Power huffs and puffs as Wolff blows the door down in Detroit 23:50
Chelsea make light work of Watford to move back up to fourth 23:53
Arsenal check Wolves to relight their European fire 19:41
Leeds move four clear as Brentford add to Wigan woes 18:07