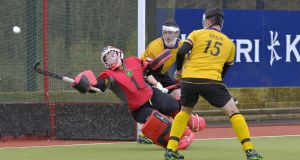 Mark Ingram moved from Pembroke Wanderers to Rotterdam during the summer. Photograph: Inpho

Mark Ingram enjoyed a stunning debut for HC Rotterdam in the Hoofdklasse as he saved a penalty stroke to earn his side a big win over AH&BC Amsterdam.

The goalkeeper moved from Pembroke to the Dutch club during the summer along with midfielder Sean Murray - from Lisnagarvey - and he got the nod as number one ahead of regular Rotterdam keeper Berend van Eldonck.

Two goals from Jeroen Hertzberger saw their new club lead 2-1 with 10 minutes to go before Amsterdam earned a stroke which South African star Justin Reid-Ross took. He caught his shot well but Ingram got down low to his left to palm it away, the key intervention in landing the victory.

Ingram is one of three goalkeepers vying for the number two role - after David Harte - in the men’s World Cup which starts in November in India, battling it out with Three Rock Rovers’ Jamie Carr and Monkstown’s Dave Fitzgerald.

Ingram, 24, is among over 20 Irish men now playing in the top leagues across Europe this season.

Elsewhere, Harte’s Kampong - the reigning Dutch champions - eased by Pinoke 4-1 while Paul Gleghorne, Matthew Bell and Michael Robson’s Crefeld in the German league lost 2-1 to Club an der Alster in their first league game of the campaign.

With the volume of Irish players abroad, new Irish coach Alexander Cox is hopeful he can set up a training base at Kampong, in Utrecht, for Mondays and Tuesdays for the recently-named 28-player panel.

Currently, the Irish squad does not have a central base and so is moving from venue to venue but Cox says the club is central enough for the European-based players to get to while only being 30 minutes from Schiphol airport.

For the next two weeks, the squad will convene at Lisnagarvey for two days a week to kickstart their preparations.