Kevin McStay: Standard of officiating has not kept pace with the modern game 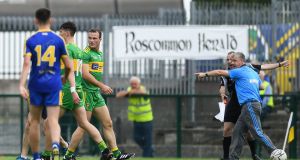 The job of the championship is to produce the two best teams and six days out from the year’s All-Ireland it’s fair to say that has happened. Logic would suggest that by the same token the final should be in the care of the three best officials, regardless of who they are.

That hasn’t happened. There’s no doubt in my mind that Conor Lane, who has been appointed, David Coldrick and David Gough, who should be Sunday’s linesmen, are the three best referees but just like in football, when you go outside the top there is a stark drop to the next best.

The final is such a big occasion now. In the last five to10 years, the hype surrounding the game and the sheer ‘size’ of an All-Ireland get bigger and bigger while levels of coaching climb all the time and the conditioning of county players is now unreal. But discipline and officiating haven’t kept pace.

That has created real frustration for many involved in the game, including myself and that’s why I’m currently serving a 12-week suspension for throwing the ball at a linesman at half-time in the Roscommon-Donegal Super 8s match.

I was frustrated with some of the calls – or lack of them – by the referee (Ciarán Branagan) and Niall Cullen (linesman). There were of course other things going on; we weren’t playing well or doing the things we’d hoped to do and that ensures the frustration builds.

I ended up doing something I never thought I would do, regretted it the second it happened and apologised to both referee and linesman at half-time. They had to take the action they took; I totally accept that and didn’t contest the suspension.

It was 100 per cent my fault and I also have to accept that my grievances were just my opinion, which was obviously not impartial but I was reasonable and courteous in everything I said.

When the other linesman, Derek O’Mahoney, came over to me before the start of the second half when I was being needlessly provocative standing on the sideline despite having been told to sit down at half-time he was very reasoned and diplomatic, saying that it would be better for me to just withdraw voluntarily and not force the referee into confronting me.

I appreciated his discretion and good sense and sat down.

I was sent off just once in my senior career and have never been previously disciplined as a manager. As a player, manager and pundit I always respected the efforts of match officials and would never question their bona fides although at times you can question consistency and competence.

It is also an issue for all inter-county managers that significant numbers of black cards and red cards are being called – or not – by linesmen. My issue with linesmen is that too many of them are enjoying the game and following the action when they are needed to keep track of what is happening in their sphere, regardless of where the ball might be.

I’m blue in the face asking linesmen to keep an occasional eye on what’s happening behind the ball.

What’s happening now is that players are being expected to sort out themselves what referees miss. There’s a cultural acceptance that it should be part of your responsibility to survive when the rules aren’t applied and that there’s something inadequate about a player who doesn’t do that.

The bigger picture for me in this is that the blanket defences, which have sprung up in recent years, thrive on this lack of application of rule because the tackle isn’t being properly refereed and these ultra-defensive systems ultimately rely on referees getting a lot of these calls wrong.

It raises the idea of having two referees. I know the view that we’ve enough difficulty getting one referee to Belmullet, never mind two, but that’s not a serious argument because we need to resource the top games better and do – for instance, Hawk-Eye – and anything that facilitates the correction of error and the detection of foul play is worth considering.

Referees closer to the action would observe more of the action and have a better chance of enforcing the rules.

There’s also the deep-seated problem of ‘letting the game flow’ and the comparison between football and hurling and the entirely different ways the games are refereed, as can be seen from how few frees are awarded in hurling – or more accurately, how many fouls go unpunished.

My view is that if the consensus doesn’t want all the rules enforced, can we sit down and decide which ones to drop because the rulebook falls into disrepute when it is so casually enforced. The duty of all referees is to protect players through the application of the rules.

That doesn’t happen. Since my day playing there has been some progress but not huge. The mad off-the-ball stuff is gone and I think the black card has had a positive impact but there is still an emphasis on teams needing to be ‘streetwise’ and other euphemisms.

I’ve lost count at the number of times that teams, like Roscommon, are said to need to be more proficient in the ‘dark arts,’ which is crazy; take the rules into your own hands.

Gamesmanship is now rife. The last few minutes of big games is becoming unrefereeable; last year’s All-Ireland final saw Dublin players diving on their opponents for the final kick-out, Lee Keegan throwing his GPS at Dean Rock and it was all treated as part of the game.

When you allow these things, more and more becomes acceptable. The Tyrone player running across the eye-line of the Monaghan free-taker doesn’t happen by accident and yet in an All-Ireland semi-final it wasn’t punished.

Human behaviour is regulated by the level of sanction applied to misbehaviour. In my view that is currently not the case in football.