The Pope playing Croke Park? Congress will see about that 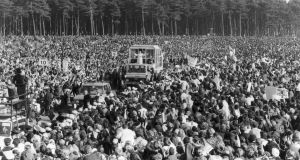 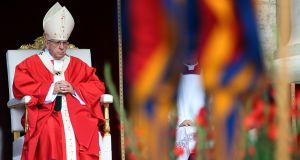 Is the Pope a Cork fan? Wearing that ensemble maybe he is. Photo: Franco Origlia/Getty Images

The Vatican delegate rose to his feet and looked out upon a stilled Congress floor. It was the third motion after lunch and the beef had been good. Dessert was the usual – snooze crumble with a dollop of snore cream on the side.

“Uachtarán, I wish to propose Motion 24 on the clár. I was hoping we might have been able to get to it in the third slot this morning, in which case we could have been the first cohort anywhere in the world to debate Vatican Three…”

He paused for laughter. The Uachtarán obliged.

“In all seriousness, a chairde Gael. I wish to propose this motion to amend a decision made at last year’s Congress regarding Rule 6.31, stating that All-Ireland finals shall be played on or before the last Sunday in August. As delegates will be aware, recent reports in the newspapers have indicated that 2018 could well be a momentous year in the history of our country with the possible visit of His Holiness Pope Francis to Ireland.

“Now obviously, far be it from me to give any indication one way or another as to the veracity of such reports. But Congress can take it that I would be privy to certain discussions that are ongoing within the Holy See at this time. So much so that when it was put to me that His Holiness would be in need of a large open-air space in which to hold a possible mass during his possible visit, I was able to put forward the obvious choice of Croke Park as the ideal venue…”

All across the Congress floor, attendees slid a little further down in their seats. Even by the usual standards, the Vatican delegate was already labouring the point. Congress veterans had seen his type before. A little more eager than he needed to be, a little less funny than he imagined. State your business, Padre. Now, before it becomes the hour of our death, amen.

“The sticking point, as delegates will appreciate, is that last year’s historic moving of our All-Ireland finals to August could well coincide with His Holiness’s potential visit. We in the Vatican fully supported last year’s move at the time, for we are avid supports of the club game just like everyone else in the association. Indeed, we had our own local derby last week against GAA Roma and though we came out the wrong side of the result, we would point out that we were underdogs since Rome naturally has a bigger pick.”

He paused for laughter. The Uachtarán coughed. The árd-Stiúrthoir made a subtle wrap-it-up hand signal.

“Er, right, yes, well...” stammered the Vatican delegate, realising he’d overshot the runway with that one. “Anyway, what we are proposing is that the All-Ireland football final be pushed back on a once-off basis, allowing it to take place on the first Sunday in September 2018. This would make room for His Holiness to possibly say mass to 80,000 people as the centrepiece event of his possible visit to our shores. Delegates, I propose this motion to Congress.”

“Go raibh maith agat,” said the Uachtarán. “Have we a seconder?”

One of the Leitrim delegates was nudged awake and instinctively shot his hand in the air. “Go raibh maith agat,” beamed the Uachtarán, delighted to see that the old ways still endured. “Any speakers?”

An Armagh delegate stood up and waited for the microphone-bearer to reach him. “Uachtarán,” he began. “Much and all as we welcome the visit of Pope Francie, surely it is too much to ask of our association that we move our showpiece game of the year back so soon after deciding by an overwhelming majority in Congress to bring it forward?

“What message does that send about the business we do here? I would be fearful that we hold ourselves up to ridicule if we go through with this. People will start getting the idea that Congress is a nonsense!”

A murmur went through the floor. Older delegates, who remembered with some fondness a time when Congress lasted a full three days, shifted uneasily in their seats. Congress lampooned is Congress endangered, after all. What would become of them in a world where the seriousness of their endeavours was publicly undermined?

Speaker after speaker got up to rail against the motion. The general thrust was that if they weren’t careful, they could find themselves unmoored from their followers. Numbers dwindling. Faith slipping. No way would they let that happen to Congress. That sort of thing was for lesser institutions, like the Catholic Church.

But then, just before the motion was put to a vote, the floor reverted to the Vatican delegate for a summing up. Having learned his lesson from the first go-round, he was brief and to the point.

“We will, of course, be happy to pay handsomely for the use of the hall,” he said.

And with that, the motion was carried.

1 Dan Leavy gets back in the thick of things as Leinster trounce Zebre
2 Mike Catt wary of young Italians and excited by Irish debutants
3 Colin Byrne: Hard to understand how golf has become the bogey man now
4 Six Nations - Ireland v Italy: Kick-off time, TV details, team news, standings and more
5 Irish duo set for AFL Grand Final as sport lifts the gloom Down Under
Real news has value SUBSCRIBE
Here is your handy guide to sport on television this week