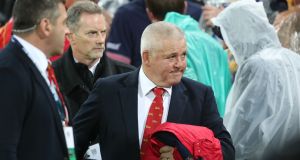 It was Warren Gatland’s weekend in Wellington. Photograph: David Davies/PA

Saturday morning’s 24-21 victory in Wellington means the Lions head into next weekend’s final Test match against the All Blacks at Eden Park knowing they are a win away from immortality.

And as if consigning New Zealand to a first home Test defeat since 2009 wasn’t enough, the tourists were handed two considerable boons on Sunday.

As expected, Sonny Bill Williams’ moment of madness in ‘The Cake-Tin’ has brought his series to a premature end - and he can now concentrate on boxing for four weeks.

Things got even sweeter for Warren Gatland when it was confirmed Sean O’Brien would escape similar punishment after he was cited for an incident with Waisake Naholo.

O’Brien has been one of the Lions best performers thus far and his availability - coupled with a clean slate injury-wise after Wellington - saves Gatland any real selection headaches ahead of Auckland.

And having spent the fall-out from the first Test asking how the Lions could possibly bounce back against the mighty All Blacks, the New Zealand press are now treating Gatland like a ringmaster rather than a clown.

For the New Zealand Herald, Patrick McKendry writes: “From the disappointment of last week to the high of a victory over the All Blacks on their home turf, Sonny Bill Williams’ four-match suspension, and the prospect of a few days of R and R in Queenstown, life must feel pretty good for Warren Gatland right now.”

Opposite number Steve Hansen, however, now has a SBW-shaped hole to plug in his midfield.

It has been rare on this tour for Kiwi press to concentrate on the All Blacks rather than the tourists - but SBW and Gatland’s team selection are now their focus.

Also in the NZ Herald, Chris Rattue writes: “The Lions second Test victory has set up a mouth-watering third Test showdown, and that rarest of things in recent All Black history - selection debate.

However, there does seems to be a consensus both at home and down under that Saturday’s result was ‘good for rugby.’

Indeed, in his column for the NZ Herald, All Blacks legend Justin Marshall writes: “To be in Wellington for that Test and to see the fans of both teams fully engaged in an electric atmosphere was amazing. The game needs it.”