Ten clubs have so far committed to scheme that seeks to attract extra 2,000 players 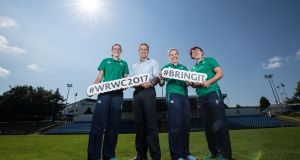 When this global gathering concludes there are plans for the future of women’s rugby in Ireland. In the wake of the World Cup, hosted by University College Dublin with the knockout stages shifting north to Belfast, 10 clubs and counting have met the criteria to cater for girls aged nine to 15 seeking the correct introduction to the sport.

The expectation is over 2,000 females will take up the game across the island in the next year or so. “Give it a Try” is the initiative’s name. Four clubs each in Munster and Leinster, one in Connacht and one in Ulster, are ready to roll out facilities and coaching.

“That’s with sustainable coaches and volunteers,” said Mary Quinn, the only female member of the IRFU committee. “We are aiming for an increase of 2,017 in 2017. Yes, that is the PR slogan but a 50 per cent increase in participation is the initial target.”

The All-Ireland League will get an injection of resources, although what precisely these will be remains unclear.

“Our goal is to improve the AIL,” said Quinn. “That means improved coaching, and coaches to cater for the increased number of players we hope to attract into the league. That means encouraging seconds teams as well.”

Presently, 4,500 females play rugby in Ireland. Exact figures are unavailable but that can be roughly divided up as 2,000 adults, 2,000 underage and about 500 in mini rugby.

A genuine and positive legacy will depend on the IRFU’s financial investment into recruiting and training coaches at all levels.

The recent agm promised €500,000 for women’s rugby. The clubs are yet to be told how much, if any, will trickle down or whether it will be ring-fenced for the two national squads.