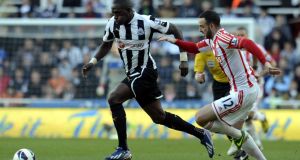 Shane Long ’s possible absence from the West Brom team with an ongoing ankle problem would be a concern for Giovanni Trapattoni who hopes to see the striker in action at the Britannia Stadium in Stoke this afternoon.

The Italian is unlikely to have a wasted trip, with Marc Wilson, Jon Walters and, despite his costly error last week, Glenn Whelan all expected to feature for the home side.

Wilson sees the manager’s attendance as a welcome opportunity to remind him what he can do ahead of Ireland ’s World Cup qualifiers, away to Sweden next Friday and then back at home against Austria the following Tuesday, a game for which tickets are still available.

The Antrim man took longer than most expected to break into the national side but says he accepts it was always going to be difficult.

“I think obviously that’s the big thing with new managers you are not familiar with: getting a chance to play. Obviously you can come over as many times as you want but if the manager doesn’t trust you, you’re not going to play, it’s as simple as that.

“I think a lot of managers are the same. There is only so much you can impress in training.”

His broken leg late last year brought a halt to his progress but his recent return and improving sharpness are perfectly timed, even if the defender is likely to be playing out of position again today due to the absence through suspension of centre half Robert Huth.

“Yeah, I’m going to have to play there. To be honest, I don’t mind, though I don’t see myself playing there week-in, week-out.

“And I don’t think Trapattoni being there will matter when I get out there. I’ve to do a job for my team first, (to help) get the three points. That’s what I’ll be concentrating on.”

He says he would always have chosen to play for the Republic and laughs at the suggestion by Northern Ireland manager Michael O’Neill this week that some of those from north of the Border might have done better if they had declared for the North.

“I think that’s none of his business,” he says. “You don’t pick your country for a career, definitely not.”

Trapattoni will be hoping Walters is in strong form given the concerns about not only Long but also Aiden McGeady, who he will be involved in some way for Spartak against Moscow rivals Lokomotiv today, James McClean, who is a doubt for Sunderland due to illness, and, of course, the absence of Anthony Pilkington.

On a brighter note, Séamus Coleman is expected to retain his place at right back for Everton against Manchester City, while Sean St Ledger is on course for another 90 minutes of first team football for Leicester after returning for the game against Cardiff in midweek.