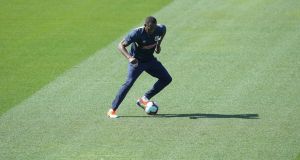 Usain Bolt insists he will receive no special treatment and that he will prove his doubters wrong as he began his “indefinite” trial with the Central Coast Mariners.

The 32-year-old is aiming to become a professional footballer having retired from athletics last year following a sprinting career that led to eight Olympic gold medals.

Bolt, who celebrated his birthday by taking part in his first session with the A-League side, has already trained with several clubs around the world, including Borussia Dortmund, Stromsgodset in Norway and Mamelodi Sundowns of South Africa.

He also captained the Rest of the World XI at Soccer Aid and has long-harboured an ambition to play football professionally.

Sitting alongside Mariners coach Mike Mulvey, Bolt said he was not expecting to be treated any differently and that any questions over his attempts to make it in the sport will be answered.

“People will say a lot of things about me, but I’ll prove them wrong,” he said at a press conference following the start of his trial.

“The coach has explained to me that there won’t be any special treatment and will treat me just like a footballer will be treated.

“I told the coach from the start ‘listen, I’m here with a blank slate’ no matter what I have learned or seen on TV it is a blank slate, I’m here to learn and get better and that is my focus.”

Bolt revealed he had also received offers from lower-league teams in Spain and France as he admitted landing a full-time deal with the Mariners is currently his only target.

“I’m just trying to get over the first hurdle — which is get a contract and get fit and to get ready to push myself to be the best,” he said.

“As you see over the years, I’m very cool under pressure. My ability to understand and learn the game very quickly is something I am good at, I think I see the game very well but I have to work on the basic skills — there are things I need to learn and that is why I am here.”

Klopp confident depleted Liverpool moving out of slump despite defeat 21:06
Fernandes free-kick gives Manchester United FA Cup win over Liverpool 19:43
Ospreys come from behind as Connacht’s home woes continue 19:31
Here is your handy guide to sport on television this week 17:01
Charles Byrnes can saddle runners ahead of appeal against six month ban 17:00

1 Klopp confident depleted Liverpool moving out of slump despite defeat