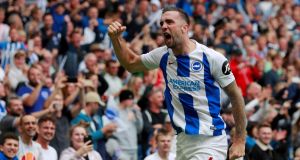 This lamentable effort was enough to remind José Mourinho that he has much more pressing concerns than Manchester City poking fun at him in their new documentary. Manchester United’s budding film critic could only grit his teeth as Brighton & Hove Albion’s jubilant supporters informed him that his city is blue. Mourinho had watched his team deliver a performance of farcical proportion and for all that he accused City of a lack of class before this game, on this evidence United are a considerable distance behind their neighbours where it really matters.

It was the first time that England’s most famous club conceded three goals in a first half since October 2015, when Louis van Gaal was in the dugout, and they suffered even more than when they were beaten by Brighton here in May.

The memory of their victory over United last season was prominent in Brighton’s thoughts. The game was played in a boisterous atmosphere and the pace was frenetic, with Chris Hughton’s players quick to the ball, strong in the challenge and brave enough to commit players forward, particularly when Anthony Knockaert and Solly March found space on the flanks.

There was nothing revolutionary about Brighton’s tactics. They were efficient in their simplicity, hunting in packs as they sought to make up for last week’s meek defeat to Watford, and there was also much to admire about the move that led to Glenn Murray breaking the deadlock in the 25th minute. Knockaert had given United a warning moments earlier, bursting on to a long ball before slashing wide from an awkward angle, and it was March who provided the assist for the goal with a sharp low cross from the left.

United’s lax defending must have enraged Mourinho. Gaëtan Bong slipped a pass behind the outnumbered Ashley Young, who was entitled to wonder why Juan Mata was not giving him more support, and Eric Bailly’s decision to vacate his position in the centre gave March the room to find Murray, who stepped in front of Victor Lindelöf before turning a clever flick past David de Gea from close range.

United had been pulled apart with astonishing ease and the Brighton fans were plunged deeper into their state of ecstasy when Shane Duffy capitalised on more atrocious defending two minutes later. Perhaps the most shocking aspect of the goal was that Duffy had just gone close to forcing home Pascal Gross’s corner. The ball came back to the German and he drilled it back into the area, where it reached Duffy again thanks to a touch from Knockaert. With nobody in a red shirt minded to react, the centre-back set himself before making it 2-0.

It was amateurish from United and Mourinho stood alone in his technical area, clapping furiously and urging his players to lift their heads. Seven minutes later Romelu Lukaku used his to halve the deficit, nodding Luke Shaw’s bouncing volley past Mathew Ryan after Brighton failed to clear their lines from a corner.

Ever so briefly, the fans in the away sensed that a comeback in keeping with United’s dashing traditions was on the cards. In the event, however, little changed after Lukaku’s goal. United were being outplayed by Dale Stephens and Davy Pröpper in midfield, where Fred was struggling to live with the intensity of the battle and Paul Pogba was showing the desire of a man wondering what he would look like in Barcelona’s colours, and Anthony Martial’s failure to step up in the absence of the injured Alexis Sánchez was a notable disappointment.

In the seventh minute Martial had spread concern in Brighton’s defence by running dangerously at Martín Montoya, who was making his debut at right-back, and moments later Lukaku ought to have done better than fire wide after Lewis Dunk, who would be replaced by Leon Balogun, injured himself conceding possession on the edge of the area.

Yet the first half ended with Martial receiving a yellow card for fouling Knockaert, who had pinched the ball off his fellow Frenchman, and the winger would make way for Marouane Fellaini after an hour.

Mourinho had already replaced Mata and Andreas Pereira with Marcus Rashford and Jesse Lingard at half-time, by which point Brighton had restored their two-goal cushion. Bailly committed a rash foul on Gross, who hammered his penalty in off De Gea’s legs, and there was no way back for United. Pogba’s late penalty after Duffy’s clumsy foul on Fellaini was immaterial.