Two from two for Liverpool after win at Crystal Palace 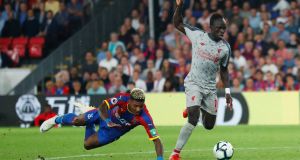 Jürgen Klopp will have taken far more satisfaction at this narrow victory than the far more emphatic dismissal of West Ham United on the opening weekend. Crystal Palace, awkward and organised opponents, were seen off in south London to maintain the Merseysiders’ pristine start to the campaign to leave their manager punching the air on the sidelines. In a season when they are expected to challenge, this was a statement of Liverpool’s intent.

Elements of their performance here were rusty, and their manager must have craved them moving the ball far quicker than they managed at times to pull stubborn rivals from their defensive base, but the visitors could take huge heart from the strength demonstrated across their back line while their hosts boasted a full complement. Virgil van Dijk, in particular, was a colossus against muscular forwards long before Aaron Wan-Bissaka’s dismissal made life rather more comfortable in the latter stages.

Even then, Palace were left to curse the substitute Max Meyer’s inability to make proper contact with Wilfried Zaha’s vicious centre, fizzed across the six-yard box, as the contest crept into its last few minutes, but this had always had the feel of Liverpool’s night. Deep into stoppage time, Van Dijk won yet another header to clear a Palace corner and, with Salah and Mané sprinting unchecked into Palace’s half, the Senegalese rounded Wayne Hennessey to plunder a second.

Manchester City’s merciless thrashing of Huddersfield Town the previous day, coupled with the apparent ease of the champions’ forthcoming fixture list, had heaped some pressure on Klopp’s side to maintain their recent happy knack of prevailing in this arena. Those memories of three-goal capitulations in these parts may feel fresh, but Liverpool had won their last four trips here in all competitions and, as they monopolised possession with the imperious Van Dijk batting away anything akin to a Palace response, their threat was ominous and, albeit in controversial circumstances, would eventually yield a lead.

The clearest opportunities, inevitably, had been prised out whenever that livewire front three were permitted space into which they could scamper with the hosts, however briefly, having pushed upfield eager to make a mark of their own. Naby Keïta, seamlessly integrated into an energetic midfield, had served notice of their intent by spinning away from Andros Townsend deep inside Liverpool’s territory midway through the opening period. The Guinean trotted forward to loft a gloriously weighted pass beyond Mamadou Sakho for Mohamed Salah to collect on the charge. Salah controlled wonderfully with his first touch and brought the ball under control superbly with a subtle second, but could only lob the ball high over the bar as Hennessey sprinted out.

The Wales international had done well to block from Keïta at his near post, too, as Liverpool struck up some rhythm, though Palace’s stubborn resistance had stretched into the final seconds of the period before they were breached. Roberto Firmino pass into Salah had left the home side exposed though the forward, having turned inside, hurdled Sakho’s initial panicked challenge and the centre-half’s second stretch in vain for the ball, before crumpling to the turf. The home side, and Roy Hodgson on the touchline, were incensed though the whole passage was clumsy and had invited disaster. James Milner, unperturbed, stroked in the resultant spot kick.

The concession had changed the complexion of the contest with Palace, their manager still smarting as his side emerged for the second half, suddenly required to press forward in search of parity. Their best opening up to then had been handed to them by Keïta’s poor pass, Christian Benteke intercepting to feed Townsend whose curled shot from distance crashed down from the crossbar with Alisson beaten. Liverpool recovered some poise to stifle Zaha’s follow-up but, for all Wan-Bissaka’s eagerness down the right flank from full-back, a solitary opening represented a worrying return from the first half.

There was far more urgency thereafter, with Alisson pushing away Luka Milivojevic’s free-kick and repeating the trick as Benteke, finally offered a lofted cross of quality to attack and duly out-leaping Van Dijk, powered a header at goal.

The Brazilian, impressively imposing as he was tested more and more, was grateful to clutch Zaha’s deflected shot into his midriff as Palace sensed some reward.

Yet, for all the locals’ renewed huff and puff, it was always Liverpool who felt the more menacing, particularly on the break as they poured forward at pace into the wide open spaces vacated by the hosts. As if to prove the point, Firmino slipped Salah through the middle with Palace pressing upfield and the striker was only thwarted by a touch from Wan-Bissaka’s right knee as he approached the penalty area. Salah was grounded and the young full-back, one of a clutch of young Englishmen watched here by Gareth Southgate, was sent off.

Palace, chasing the game while depleted, felt critically undermined from then on in and Mané finished them off on the break deep into added time.