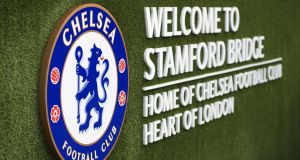 Uefa has launched an investigation into the conduct of a section of Chelsea’s supporters. Photo: John Walton/PA Wire

Uefa has launched an investigation into the conduct of a section of Chelsea’s supporters as it seeks to determine whether they were guilty of an antisemitic chant during last week’s Europa League tie in Hungary.

The governing body has confirmed that, according to Article 31 (4) of the Uefa disciplinary regulations, it has commissioned an ethics and disciplinary inspector to look into “the alleged racist incidents”, having scrutinised reports submitted last week by its officials, including the Macedonian referee and his assistants, at the game against Vidi in Budapest which ended in a 2-2 draw.

If the fans are found guilty of behaviour “that insults the human dignity of a person or group of persons on whatever grounds, including skin colour, race, religion or ethnic origin”, the minimum sanction to which Chelsea would be subjected is the partial closure of Stamford Bridge at a Europa League game. The report will be submitted in mid-January.

Chelsea publicly condemned a small section of their travelling support on the evening of the game for an anti-Tottenham Hotspur chant which referenced “yids”. They questioned the fans’ “brainpower” and said they had “shamed the club”. The incident in Budapest came four days after Raheem Sterling was the subject of allegedly racist abuse during Chelsea’s win over Manchester City, with four supporters having been suspended by the club pending further investigations.

Chelsea, whose owner Roman Abramovich is Jewish, launched a campaign in January to educate about antisemitism in football as they seek to change behaviour and attitudes. They are attempting to identify those from their 1,273-strong away support who may have sung the chant in Hungary with a view to imposing bans, but will also offer anyone found guilty the chance to enter an educational programme.

Some travelling fans were photographed in Budapest in the buildup to the game holding a Chelsea Headhunters flag which features a Nazi symbol. The club believe around 40 fans had travelled to Hungary without tickets and are confident the banner did not make it into the Groupama Arena. – Guardian service