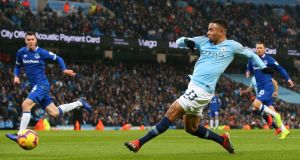 Gabriel Jesus struck twice as champions Manchester City reclaimed top spot in the Premier League with a 3-1 victory over Everton at the Etihad Stadium.

Raheem Sterling also got on the scoresheet, coming off the bench after a difficult week in the headlines, to make the game safe after the lively Dominic Calvert-Lewin had given Everton hope.

City’s performance marked a strong return to form after last week’s first league loss of the season at Chelsea and put pressure back on rivals Liverpool ahead of their clash with Manchester United on Sunday.

City were further lifted by the return of Kevin De Bruyne as a substitute after six weeks out while Sergio Aguero was also back in the squad, although he did not come off the bench.

Aguero’s absence from the starting line-up allowed Jesus another opportunity after criticism of his recent form. He responded well, scoring his first Premier League goals since August, although City needed to work hard to gain the upper hand.

Everton were well organised and made strong start but they missed the injured Idrissa Gueye in midfield and were eventually worn down by a superior City.

Everton threatened when Calvert-Lewin forced a good save from Ederson, although he was ruled marginally offside, and Richarlison volleyed over from a Lucas Digne cross.

City gradually began to get a foothold as Fabian Delph shot at Jordan Pickford and then fired narrowly over.

Pickford also made a good save to prevent an own goal after Michael Keane almost turned in an Ilkay Gundogan cross but he was convincingly beaten as Jesus opened the scoring after 22 minutes.

Everton contributed to their own downfall as a poor clearance by Yerry Mina was seized upon by Gundogan. The impressive Leroy Sane picked up possession and played in Jesus, who fired a low shot underneath Pickford.

Pickford then did well to deny Riyad Mahrez but City were now well in control. Jesus lashed home what he thought was his second but he was flagged for offside.

The Brazilian was not to be denied for long, doubling his tally with a firm header from a Sane cross five minutes after the interval.

Gundogan went close to adding to the lead as he combined nicely with Mahrez on the right but missed the target as he slid in to shoot from a return pass.

Everton gave themselves hope against the run of play when poor defending from City allowed Digne the space to cross. Calvert-Lewin rose the highest and nodded in, via a deflection off Delph, after 65 minutes.

City responded forcefully by sending on Sterling and within minutes the England forward had restored a two-advantage, heading home a Fernandinho cross from six yards.

That gave City the breathing space to reintroduce De Bruyne to the action after his latest lay-off.

Everton were not finished, however, and could have set up a tighter finish as Richarlison and Theo Walcott both shot over from in front of goal. Calvert-Lewin was booked for clashing with Delph after a series of full-blooded tackles in quick succession from players of both sides.

It actually proved a ragged finish by City, and Calvert-Lewin went close again with a flick, but the hosts had done enough.