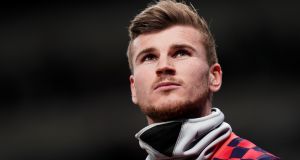 RB Leipzig striker Timo Werner appears to be closing in on his long-mooted move to the Premier League. Photograph: PA

After looking destined for Liverpool for so long, Timo Werner is set for his Premier League move – but heading to London rather than Merseyside and wearing blue rather than red, as a move to Chelsea looms. Nothing should be assumed yet, as what appeared a done deal for the soon-to-be Premier League champions went cold, with the prospect of paying the RB Leipzig forward’s €60m (£52.7m) release clause meriting greater reflection now than it did in a pre-Covid-19 altered reality. Yet all Chelsea have to do is meet the clause – and even in the current climate it is a deal that offers fine value – and to be truly wanted is a big deal to Werner.

Liverpool fans may scratch their heads as to why their club checked their run late on, particularly given Werner’s keenness – the public praise of Liverpool and Jürgen Klopp (in excellent English) and suggestions of his own potential fit there – and the much-publicised Zoom call with the charismatic manager. Yet this apparent about-turn is not out of character with his career to date.

Werner’s path from becoming Stuttgart’s youngest professional debutant and goalscorer in 2013, at 17, has been bumpier than the raw numbers and YouTube highlights would suggest. He is softly spoken but knows his own mind, and criticism over the last few years has only strengthened his resolve. It was expected for a long time that he would join Bayern Munich, but their deprioritising of Werner as they chased more cosmopolitan targets led to him surprisingly signing a new deal at the Red Bull Arena last year, which included the current clause.

When Hansi Flick recently made it clear he would love to pick up the thread and bring Werner to Bavaria after all, the player said he saw his future lying abroad.

Events had made Werner tough and adaptable. In summer 2016 he took the plunge and joined newly promoted RB Leipzig, and it changed his footballing life – on one hand in the way he would have hoped for and on the other in transforming his image in a way he would have perhaps struggled to have foreseen. Stepping into a focused, organised, nurturing environment at the age of 20 helped him realise his potential. He scored six Bundesliga goals for a dysfunctional Stuttgart in his final season there (his best total at that stage) as they stumbled to a ruinous relegation; in the following campaign at Leipzig he rattled in 21, despite playing fewer games than the season before.

Werner paid a price, though. What he gained in terms of on-pitch support and aptitude he lost in respect of his image. Having apparently fled the sinking ship of his hometown club – that he netted them a much-needed initial fee of €10m, Leipzig’s club record at the time, is sometimes glossed over – Werner attracted opprobrium for joining (and undeniably strengthening) a club whose mere presence in the top flight many German football fans found impossible to stomach. The attacks on Leipzig – banners, chants, thrown paint and bull heads – widened to incorporate very personal attacks on Werner, which escalated after he took a dive in a win over Schalke in December 2016.

The pop singer Ikke Hüftgold even released Hurensohn (son of a bitch), set to the tune of Belinda Carlisle’s Heaven Is A Place On Earth and based on a derogatory terrace chant about Werner, as a summer party anthem in 2017. Hüftgold did point out the refrain was actually “Imo Erner ist kein Urensohn” and claimed he wanted to “defuse the situation with humour”, but the production of T-shirts emblazoned with “Timo Werner ist ein Hurensohn” in German-heavy resorts in Mallorca that summer suggested the nuance had been lost on many.

“It is less about Werner’s dive,” wrote 11 Freunde’s Stephan Reich in June 2017, “and more about the jersey in which he made it.” The sensitive Werner was affected by the abuse and by the whistles he received while playing for Germany (though there were enough other culprits for the shambolic defence of the World Cup in Russia that he, hidden away on the wing in a failing team, escaped much censure).

Having come through all this, Werner is enjoying a career-high season at 24 under the guidance of Julian Nagelsmann. The young coach has started to broaden Leipzig’s palette, much as he did progressively at Hoffenheim but clearly with a higher quality set of players, moving them far beyond being simply a team of skilled counterpunchers.

This switch has done likewise for Werner. He had seen early how he and his team might be typecast as one-trick ponies, only capable on rapid breaks, when he mused in Leipzig’s second Bundesliga season that opponents would give his team the ball and challenge them to break them down. Nagelsmann has largely resisted the temptation to place Werner on the left wing, where he is highly capable (and from where he caused Sweden problems even in the wreckage of that desperately poor 2018 World Cup campaign).

Instead, he has been the coach’s go-to centre-forward, still with the pace to blaze clear of the defence should the opportunity arise as his goal in Monday’s win at Cologne showed, but also with the craft and shooting power to take on more deeply set defences. That tendency to drift out to the left, Thierry Henry-style, will never leave his game but Nagelsmann seems to have decided it should be a complementary attribute to his arsenal rather than a vocation.

Everything suggests it is a skillset that will quickly pay dividends in the Champions League. Werner is prepared and already knows he has the tools to succeed, whatever the destination.