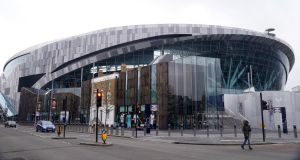 Tottenham have received a £175million loan from the Bank of England to help them through the coronavirus crisis. Photograph: John Walton/PA Wire

Tottenham have borrowed £175 million (€195 million) from the Bank of England to help them through the next year or so, as they respond to the financial destruction of the Covid-19 crisis.

The club fear that they may lose more than £200 million (€220 million) of revenue in the period from the start of lockdown to June 2021, including broadcast rebates, and they have sought help from the UK government’s Covid Corporate Financing Facility, which has provided them with the unsecured loan. It is repayable in full next April at a rate of 0.5 per cent, which is low in commercial terms, although Spurs could redraw it for another year.

José Mourinho has said the club are “not going to spend rivers of money” in the next transfer window, whenever that opens, and the bank loan will not be used for new players – rather to provide flexibility and support during what will be a hugely testing time.

Mourinho was told when he joined last November that there would not be a pot of cash for a January squad overhaul; the manager was allowed to sign Steven Bergwijn for £25.4 million (€28.25 million) and this was offset by Christian Eriksen’s £16.9 million (€18.8 million) departure to Inter Milan. Mourinho’s eyes were wide open as to the financial realities at the club and the situation is even more straitened now.

Spurs have been badly hit by the pandemic because they had banked on revenue streams from fans attending various events at their stadium – and not only football matches. They have had to cancel a rugby union game between Saracens and Harlequins, Anthony Joshua’s world title fight against Kubrat Pulev, two NFL fixtures and England versus Australia in the rugby league Ashes. Concerts from Guns N’Roses and Lady Gaga and the Capital Radio Summertime Ball have also gone.

The club noted in a statement that “as of today, it is unclear when there will be a return to spectator-attended live events”, and Daniel Levy is eager to explore technological solutions that could help fans to come back to the stadium.

The chairman said: “We have always run this club on a self-sustaining commercial basis. I said as early as March 18th that, in all my 20 years at the club, there have been many hurdles along the way but none of this magnitude – the Covid-19 pandemic has shown itself to be the most serious of them all.

“It is imperative that we now all work together – scientists, technologists, the government and the live events sector – to find a safe way to bring spectators back to sport and entertainment venues. Collectively we have the ability to support the development of new technologies to make this possible and to once again experience the passion of fans at live events.”

Spurs announced last September that they had refinanced their stadium loans. They borrowed £637 million (€710 million) from Goldman Sachs, Bank of America Merrill Lynch and HSBC for the £1 billion (€1.1 billion) project and the money was due to be repaid by April 2022. But through US investors Levy converted roughly £525 million (€585 million) of the debt into a bond scheme, with staggered maturities of between 15 and 30 years.

Levy announced Spurs’ accounts for last season at the start of the coronavirus crisis, which showed total revenues of £460.7 million (€513 million) and robust post-tax profits of £68.6 million (€76.35 million). – Guardian