Sunderland ’Til I Die: Much more than promotion on the line 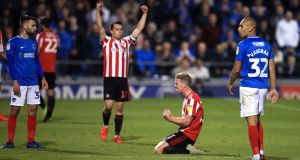 There was a photograph of Grant Leadbitter on his knees on the final whistle against Portsmouth. It screamed. Photograph: Adam Davy/PA Wire.

He was down by the sea again, down at a spot where he went fishing as a boy. Roker Pier, the lighthouse at the end, Grant Leadbitter would throw his line in here. He laughed quietly at the thought of it.

Leadbitter had been back home a week or so. Back in Sunderland, back at the Stadium of Light. Part of him had never left, even though he’d been away nearly 10 years, first at Ipswich, then closer, down the road at Middlesbrough. He still supported Sunderland and, when he could, would go to the odd away game as a fan. But he would bypass the Stadium of Light. An appearance there would get people talking. Besides . . .

It was a Monday lunchtime at the beginning of February. Two days earlier Leadbitter had played his first game back as a Sunderland midfielder. It was a scratchy 1-0 win over AFC Wimbledon at the Stadium of Light, a victory that left Sunderland three points off automatic promotion with two games in hand.

There were more than 30,000 at the match and you could sense the club and team felt itself handily placed for an upwards surge.

Leadbitter was given a warm welcome-home ovation. He understood it. He also understood eyes would be on him as he briefly bent down to touch the turf on the touchline. He did it quickly, nothing showy.

Beneath the grass there, lie Leadbitter’s father’s ashes. Brian Leadbitter was a Sunderland fanatic who was at Wembley in 1973 for the FA Cup win over mighty Leeds and who started taking young Grant to Roker Park when he was two. When Grant was first asked to come and train by Sunderland – aged six – you can imagine Brian’s smile.

When Grant was then signed as a professional on his 17th birthday, and made his debut eight months later, Brian Leadbitter would have been so proud. His son was out there in a Sunderland shirt; his son was out there alongside Tommy Butler and Sean Thornton at a club beset by economic anxiety.

It was 2003. Sunderland were in their yo-yo years. Relegation was followed by promotion, followed by relegation again. Then in 2006, Drumaville, Niall Quinn and Roy Keane arrived and the club bloomed. Leadbitter scored late winners at Southampton and home to QPR as Sunderland stormed the Championship.

A fond memory of that season he mentions is “my first goal – against Sheffield Wednesday. Roy had come in and we went off to Portugal for a mid-season break after that. That was good. Winning the Championship was special.”

Sunderland stayed up and stayed up again, a Premier League club. In 2008, Leadbitter came off the bench to score against Arsenal. Around him were players such as Steed Malbranque, Dwight Yorke and Craig Gordon. Sunderland had upgraded.

But attention fell on the 22-year-old local lad who had run to the touchline after he scored and touched the grass.

Brian Leadbitter had died suddenly, and young. His request had been to be buried at the Stadium of Light. Jimmy Montgomery and other heroes of Brian helped carry his coffin. Grant was distraught and that feeling didn’t go.

Soon, though, he’d go. A Texan-Irish billionaire, Ellis Short, had bought out Drumaville and Keane had become his first victim. Keane moved to Ipswich and Leadbitter joined him there. There were various reasons, but playing on the Sunderland pitch was not a comfortable experience. How could it be? He needed space.

After Ipswich there were seven sometimes long, sometimes good years at Middlesbrough. He lost a Wembley play-off; won promotion. Closer to home, to his mother and sisters, Leadbitter forged connections to Teesside.

And as the years passed, the agony of losing his father eased a bit. The idea of a Sunderland return, always there, grew. In January, it happened and so there he was just after turning 33, back on his pitch. Sunderland were now a League One club.

“The club gets tarnished with the last couple of seasons. There’s been negativity from that. Bit by bit we want to change that, get the fans back, full houses. That only comes from winning games, from being in the hunt.”

Then he added: “The reality is we’re in League One.”

He’s good at that, Grant Leadbitter, bringing people back to reality, sorting out what’s real and what isn’t real. He would have made a good editor of the Netflix documentary Sunderland ’Til I Die in its overcooked moments.

Leadbitter liked it: “It showed how the city lives and breathes the club.”

Then he added: “But there’s a lot of places like it around the country, not just Sunderland. When you’re from here, obviously we’re a bit biased.”

The documentary’s introduction finishes with the lighthouse Leadbitter had just pointed at. But it did not illuminate the crucial moment of last season when Sunderland were relegated at home to Burton Albion. Maybe this was because those in charge of the club, chief executive Martin Bain and manager Chris Coleman, had not warned relegation that afternoon was a danger. Somehow they had not done the maths. They were informed after the event. It was calamitous.

The club had been skint before but Short wanted to sell up and Sunderland had just suffered back-to-back relegations. What has gone on this season has to be seen in that light, and shade.

Leadbitter knew the drop he was taking when he returned. For the Wimbledon game, for the first time since his father’s death, his mother Susan turned up at the ground. She saw her son back out there.

But Susan was unwell and early this month she died.

Frayed, Leadbitter played the day after – in the play-off semi-final at Portsmouth. He felt he had to, felt compelled. But his distress was clear, privately more than publicly. It had taken him years to even speak about his father, then when he finally can, and he goes back home, this.

Sunderland got past Portsmouth. There was a photograph of Leadbitter on his knees on the final whistle. It screamed.

Now there is tomorrow. Sunderland go to Wembley to try to rectify the famous play-off defeat by Charlton in 1998. Grant and Brian were there for that. The son knows what this means.

There is a lot of posturing in football and there are things at Sunderland that may not be all they seem. But Grant Leadbitter is not one of them. He is real, Sunderland’s history is his history.

The club’s finances are again fragile, they could do with a first Wembley win since 1973. If it comes, a small lighthouse in midfield will guide them there. Then he will go home and his life will never be the same again.