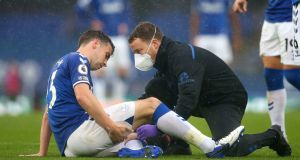 Stephen Kenny has confirmed that Seamus Coleman is all but certainly out of Thursday’s critically important Euro2020 play-off game against Slovakia in Bratislava after suffering a hamstring injury in Everton’s win over Brighton on Saturday.

“It’s disappointing in relation to our captain,” said Kenny on Sunday afternoon. “He has been in very good form and was having an exceptional game yesterday, I was watching and knew at the time. He seems to have a hamstring strain that will almost likely rule him out. We’ll see but the scan has revealed that he will probably have to withdraw.”

Kenny said that Coleman was disappointed when the two men spoke afterwards but he dismissed the notion that the loss of the squad captain who didn’t feature in either of the games last month, had at least addressed the major selection dilemma that he was facing into over the coming week.

“Yeah. He was disappointed,” said the Dubliner. “He loves playing for his country and is a very passionate captain. He’s knows that it’s an important game and he doesn’t want to miss out on it but there’s nothing we can do except to prepare for Slovakia and make sure we are right for that.”

As for the fact that that the player’s likely withdrawal makes life a little more simple when it comes to naming a right back in his starting line up, Kenny said that having stronger options was hardly an inconvenience.

“That never concerns me,” he said, “having a dilemma. You can never have enough good players. You don’t have the problem in most positions but it’s a problem that we would like.”

Blackburn Rovers defender Darragh Lenihan is also out of this week’s game after suffering an injury in training this week that kept him out of the Championship club’s game this weekend.

Burnley’s Kevin Long, who played 90 minutes in the defeat by Newcastle on Saturday has been called in to provide defensive cover and the manager suggested there was likely to be another call-up or two with a final decision on Coleman, whose scan results were only provided to the association moments before the afternoon press conference, expected this evening.

Harry Arter is also a doubt having come off during Nottingham Forest’s 1-2 home defeat by Bristol City with a thigh strain. Kenny said that he would wait for further information on the midfielder’s condition and he acknowledged that there are another couple of concerns but declined to name the players involved. Neither Callum O’Dowda (for City at Forest) nor Robbie Brady for Burnley, got on over the weekend despite making the bench after recent injuries.

With 11 players involved in club games on Sunday there is further scope for problems over the next 24 hours and Kenny admitted that even if everybody else is fit, his preparations have been disrupted because of the staggered club schedule with the best case scenario being that almost half of his squad will be doing a recovery session on Monday before the group travels on Tuesday.