State of Play: The rise and fall of Sporting Fingal 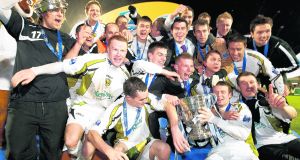 It is 4.51pm on November 22nd, 2009 in Tallaght Stadium and Gary O’Neill has contorted himself in a superhuman manner to head the winning goal in the final moments of the FAI Cup Final. First Division side Sporting Fingal, a club that had not kicked a ball 21 months earlier, beat Sligo Rovers that day to achieve what many top clubs spend decades trying to do. Fifteen months on, though, the fairytale was over.

What on earth happened? Let me explain.

Sporting Fingal was born from a conversation I had with Niall Quinn in February 2006. As a Fingal County Council (FCC) official, I was doing work with Niall and casually mentioned that a booming area like Fingal should have a presence in the League of Ireland. Niall immediately pointed me towards Liam Buckley and everything sprang from there.

Liam had already put together a model of how a successful club should be structured and had strong ideas on issues like youth development, facilities and its position in the surrounding community. This template suited Fingal ideally.

FCC recognised that football could offer a means of delivering programmes to deprived and marginalised communities while at the same time raising the profile of Fingal as a county. The county manager, David O’Connor, got completely behind the club idea.

With the League of Ireland to be expanded to include a new “A” Division for 2008, I was given the task of having it established and the facilities in place in time for FCC to make a club licence application for the 2008 season. Time was tight but we did it. Then, with the sudden demise of Kilkenny City, Sporting Fingal was bounced straight into the First Division.

It’s impossible to overstate the logistical challenges of creating a professional football club from nothing in two years but, with the help of many dedicated people, we overcame them. Our priority was to get a football academy built with the focus on professional facilities, top coaching and an emphasis on education and lifestyle.

The club’s business plan, in fact, had only set a target of attaining Premier status after five years. Liam simply delivered far ahead of schedule and during its three years in existence, Sporting Fingal won the FAI Cup, came within five points of winning the league and qualified for Europe twice. In reality, all the success was probably a curse rather than cause for celebration. It gave the wrong impression because the real ambition had been the creation of an innovative bottom-up entity for social and community initiatives across the county.

Financing it was, of course, critically important and O’Connor recruited Gerry Gannon, a locally based developer. Gerry liked the picture painted for him and was particularly enthused by the academy plan. He took over ownership of 74 per cent of the club and agreed to fund it for five years while O’Connor successfully recruited other sponsors. The council retained 26 per cent and committed to building the academy.

The club’s rapid success went down very well within the council but things became difficult in 2010 as the economy crashed. Nama was pressurising Gerry to break his link with the club and O’Connor was struggling to find a new partner.

Eddie Jordan was suggested and at one point I received a call from O’Connor who was in California on a family holiday. He told me to check out the remaining Formula One venues for that year, so that we could fly there to meet Eddie. Sadly, the trips to Singapore, Sao Paolo or Abu Dhabi never materialised.

As the financial pressures began to intensify, FCC began to meet some of the running costs of the club, something that had never been intended. I believed the subvention was justified but it was unfortunate that it was not done in an open and transparent manner.

In the space of a couple of weeks, FCC’s pride in the whole project was transformed, I believed, to callous indifference.

With his failure to recruit Jordan, the county manager seemed to lose interest and it was left to Liam and me to find a solution. We succeeded in bringing on board a local businessman who was keen to take over FCC’s role but an initial agreement collapsed when the council refused to commit the verbal terms to writing.

The following days were the toughest of my working life. I was given strict orders to shut the club down and to issue redundancy notices to all players and staff, regardless of options still available. I was instructed that no outstanding wages were to be paid from club funds. I refused to allow wages to go unpaid and was threatened with dismissal.

The heartbreaking task of telling the players that they were unemployed fell to Liam but I won’t forget the sickening feeling of congratulating Ger O’Brien on the birth of his first child as he was about to be told to find a new job.

In the space of a couple of weeks, FCC’s pride in the whole project was transformed, I believed, to callous indifference. Had the academy been built, as had been repeatedly promised, there would have been something more tangible to cling to or at least a legacy left but the commitments regarding it were never honoured and the council actually seemed happy in the end to see the club die.

In hindsight, the execution of the Sporting Fingal project wasn’t flawless and, given the opportunity, many things would have been handled differently but there were positives. The Sporting Fingal Community Trust, for instance, which was modelled on the Sunderland Foundation, had already started setting up programmes, in partnership with the Gardaí, VEC, HSE and other agencies, to address social and integration issues through the vehicle of sport. Along with the club itself, these collaborations collapsed.

It’s not uncommon across Europe to find municipalities who, for the benefit of their communities, hold stakes in professional football clubs and local authorities are uniquely well placed to enable a football club deliver on its full potential. FCC’s experience might be taken as a warning by others, but let’s hope not. Shamrock Rovers, in any case, should give daily thanks to South Dublin County Council.

*John O’Brien is a former Senior Executive Officer of Fingal County Council and was Secretary/Chairman of Sporting Fingal FC.