Solskjær praises Martial for building himself into ‘powerhouse’ centre forward 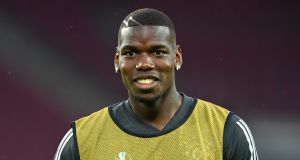 Paul Pogba of Manchester United during a training session ahead of their Europa League quarter-final against FC Copenhagen in Cologne, Germany. Photograph: Sascha Steinbach/Pool via Getty Image

Ole Gunner Solskjær has praised Anthony Martial for building up his physique in extra gym sessions that have transformed him into a “powerhouse” centre forward.

The Frenchman’s goal in Wednesday’s 2-1 Europa League win over Lask was his 23rd of the season, putting him one ahead of Marcus Rashford’s tally in what is a career-best campaign.

Martial’s play has been accentuated by a more robust presence, and he is now often able to shrug off defenders when running in on goal. It was put to Solskjær that Martial has become a powerhouse No 9.

“Definitely. Anthony has made huge strides this season in many aspects of his game,” the manager said.

“I like him scoring, him being in between the posts, scoring the simple goals – we know he can do worldies, like he’s done a few times. He’s in the gym a lot working on his fitness and strength. The staff have done a fantastic job with him. Physically he is at the best level of his career, and I’m just looking forward to seeing him improve. There’s more to come from him.”

With Mason Greenwood also scoring 17 times Solskjær’s three forwards have contributed a total of 62 goals. The Norwegian believes competition between them only raises standards.

“Scoring goals is always good for strikers. Seeing others score goals – it gives you as well a little bit of an edge because you don’t want to be behind them,” Solskjær said.

“But you also play for the team, and the three of them have been backing each other up. For me I hope they will continue their development as it will make for exciting times for United in the next few years.”

For Monday’s straight knockout Europa League quarter-final against FC Copenhagen in Cologne, Solskjær has a selection dilemma regarding whether to retain Sergio Romero, who he often selects for cup competitions, or choose David de Gea, his regular number one

Solskjær said: “That’s an obvious question. I think I must be the most privileged manager in the world with my goalkeeping department, having Sergio, David, and we’ve got Dean Henderson coming back [from loan at Sheffield United]: three top keepers this season.

“Sergio has shown how important he has been for us and for me, David is always performing. It is difficult, yeah. But it’s a nice problem to have.”

Solskjær hinted that Henderson could be loaned out again next season.

“Competition for places is important with Dean, Sergio, David in the ranks. Lee [Grant] is a fantastic pro who is backing them up. It will be difficult to keep the three of them at the club, so we will see what the decision will be there.”

Copenhagen were last Danish champions in 2018-19, and in Ståle Solbakken have a manager who is a compatriot of Solskjaer’s, the two knowing each other since their playing days in Norway. In two tenures at Copenhagen Solbakken has claimed eight Danish titles.

Solskjær, who left the injured Phil Jones behind Manchester, said: “I have known Solbakken since I played against him the first time in 1995. He had a very good career as a [midfield] player – he was always the one we looked to try and stop.

“He’s had a fantastic coaching career: in Copenhagen two spells, been in the Championship with Wolves. He’s had his ups and down but he’s come again, [and will] leave a legacy at Copenhagen. I went to Copenhagen to do my coaching [badges] and saw them lose to Chelsea. Hopefully this time they’ll lose to us.

“I am not surprised at Copenhagen reaching this stage at all. I know how Solbakken has built the club and what they’re about. We played against them [when I managed] Molde. Copenhagen has a great history in getting to Europe and doing well, and I think this team has very good players, young interesting forwards and experienced players in midfield and at the back. Their biggest strength is the team work and how well organised they always are.”

Solskjær is clear that no pressure has been relieved by his team’s third-place Premier League finish.

“I don’t think so because we went into this season knowing the Europa League is a great chance for us – to try and get a trophy but also to groom a few of the youngsters.

“Champions League for this season was, of course, what we all wanted. But maybe we wouldn’t have had the chance to play the likes of Brandon [Williams] and Mason [Greenwood]

1 Gordon D’Arcy: the next fear for Irish rugby is England in Twickenham
2 David Moyes discovered positive test an hour after arriving at London Stadium
3 Seán Moran: Fallout from Tyrone final celebrations will concern GAA
4 How Dundalk’s opponents Sheriff started on wrong side of the law
5 Pro14 teams need private planes to keep show on the road
Real news has value SUBSCRIBE
Crossword Get access to over 6,000 interactive crosswords