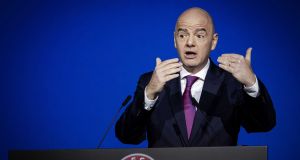 Fifa’s deputy general secretary is “100 per cent confident” the organisation’s president Gianni Infantino will face no criminal charge, far less be convicted, as a result of the proceedings which have been opened against him.

Infantino is the subject of proceedings opened by a special federal public prosecutor in Switzerland over meetings he held in 2016 and 2017 with attorney general Michael Lauber.

The prosecutor, Stefan Keller, investigated anonymous complaints about the meetings and a statement announcing the opening of proceedings issued last Thursday said there were “indications of criminal conduct” in relation to them.

Fifa and Infantino categorically deny any wrongdoing in relation to the meetings, and deputy general secretary Alasdair Bell said on Monday: “There is something a little bit grotesque and unfair about all this because we are 100 per cent confident that there will never be a criminal charge, far less a criminal conviction against the Fifa president.

“But we have a situation, and we have to acknowledge this, where objectively there is damage to both Fifa and to the Fifa president simply because of the existence of this criminal investigation and we think that’s not right.”

Fifa say the meetings were held to offer the attorney general the world governing body’s full support in its investigations of the alleged criminal activities of the old Fifa regime under Sepp Blatter, which Bell referred to as an “organised kleptocracy”.

Neither Infantino nor Lauber took notes from any of the meetings, but Fifa insist that the absence of them, or Infantino’s inability to recollect details of what was discussed, is not sufficient to warrant a criminal complaint or an investigation.

“We, Fifa, and Gianni Infantino, president of Fifa, have absolutely nothing to hide,” Bell added.

“We want the truth to come out, we want to be as transparent as possible, we welcome questions.

“There is no factual basis whatsoever for this criminal investigation. There is no description of criminal conduct of any kind that has been communicated to Fifa, unless meeting the attorney general has somehow become a crime in Switzerland which I rather doubt.

“We have no idea what it is that the Fifa president is supposed to have done wrong or which could even remotely be described as criminal conduct. He went to see the attorney general because it is part of his job to do so.

Lauber has tendered his resignation after an investigation by the supervisory authority for the office of the attorney general found he had concealed the meeting with Infantino.

Bell said the complaints may be from individuals who were motivated by a desire to bring Infantino down.

“They have some anonymous complaints, this is the genesis of the investigation. It may be that the people who made the complaints would like to see Gianni Infantino fall. Here, we’re talking about a criminal investigation. If there are people who would like to see him fall and have orchestrated this, I think it would be a function, a worthwhile and good function of the media, to bring this out.”

Bell admitted it was a concern that the proceedings could drag on, causing reputational harm to Infantino and to Fifa more widely.

There has been no word yet over whether Fifa’s independent ethics committee will launch its own investigation, but Bell said Infantino would “respect” whatever decision the committee made, even if that meant a temporary suspension pending the outcome of its investigation.

Bell said Keller had not approached Infantino before or after opening the proceedings against him.

“Perhaps if (Infantino) had been approached we would not have arrived at this situation where there is such a huge story simply because there is the existence of a criminal investigation,” he said.

Swiss lawyer Marc Henzelin, who joined Bell on the conference call, said there was a “very low” threshold for opening a criminal investigation in the country, saying it is “almost automatic” that a file be opened when a complaint is made.

1 Leo Cullen: ‘It feels like it all came crashing down on top of us’
2 Dave Hannigan: How Christy Ring arose the curiosity of American media
3 Oisin Murphy denies taking cocaine after failed drugs test in France
4 Charlesland Golf Club set to close permanently in December
5 Racing 92 players test positive for Covid-19 two weeks before Champions Cup final
Real news has value SUBSCRIBE
Crossword Get access to over 6,000 interactive crosswords