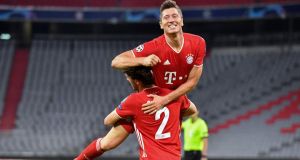 Robert Lewandowski struck his 52nd and 53rd goals of a stunning season and laid on two more as Bayern Munich saw off Chelsea 4-1 to reach the Champions League quarter-finals.

Bayern flexed their muscles as one of the tournament favourites once again, securing a 7-1 aggregate victory over Chelsea in the last-16 tie.

Peerless Poland striker Lewandowski converted a penalty and thumped home a header, while also teeing up Ivan Perisic and Corentin Tolisso as the Bavarians cruised past the Blues at the Allianz Arena.

Tammy Abraham tapped in his 18th goal of the season amid a promising showing from Callum Hudson-Odoi, with the teenage England winger laying on an assist and seeing a fine 20-yard strike ruled out for offside.

Some 165 days since Bayern thumped Chelsea 3-0 at Stamford Bridge on February 25, Hansi Flick’s men finally completed the job to reach the last eight.

Bayern have long since wrapped up the Bundesliga and German cup double and will be right in the running to complete a superb treble.

Frank Lampard’s first campaign at the Chelsea helm has finally come to an end, fizzling out in frustrating fashion in Germany.

The injury-hit Blues were missing seven frontline players through knocks and suspensions and could not bridge the clear gulf in class to the menacing Munich men.

Despite this hefty loss though, Lampard and Chelsea will still point towards a promising future.

Champions League qualification was secured by the Blues’ fourth-place Premier League finish, and Lampard is already midway through rebuilding the Stamford Bridge squad.

Chelsea endured a nightmare start when Lewandowski stroked home a perfect spot-kick to put Bayern ahead on eight minutes.

The Blues initially thought the offside flag would come to their rescue, only for VAR to overturn that decision.

Once the Bayern attack was deemed legitimate, Willy Caballero’s upending of Lewandowski was always going to be a penalty — and a yellow card for Chelsea’s veteran stopper.

Lewandowski’s all-court attacking threat was in evidence just minutes later when the Poland striker teed up Perisic, with the Croatia midfielder tapping home.

With Chelsea 2-0 down on the night and five down on aggregate, the Blues were staring down the barrel of a humiliating evening in Munich.

Hudson-Odoi had other ideas however, with the winger desperate to make an impact against the club that courted him so heavily only a year ago.

Cutting in off the left and linking up with Abraham, Hudson-Odoi whipped a fine 20-yard effort past a full-stretch Manuel Neuer. Chelsea’s joy was short-lived however, as VAR chalked off the strike for offside.

The England international refused to relent though, and forced a Blues breakthrough just before the break when he powered to the byline and drilled in a low cross that Neuer could only parry back into the danger area. The lurking Abraham tapped home as Chelsea salvaged some consolation from a chastening half.

Mason Mount was unable to cap a smart break with a finish to open the second half, before Chelsea were forced onto the back foot by Bayern’s possession play.

Thomas Muller wound up furious with himself for not slotting home Alphonso Davies’ fine cross, with the Germany star fluffing a potential tap-in.

Muller booted the base of the post in frustration, before letting out a furious roar that echoed around the empty Allianz Arena.

Lewandowski flashed a volley across goal as Bayern continued to press, while Thiago failed to convert a free header from Joshua Kimmich’s corner.

And Lewandowski grabbed the last word for himself, powering home a header to improve yet again an already stellar personal campaign.