‘I would say it’s the strongest Czech team, on a club level, that I’ve seen for a long time’ 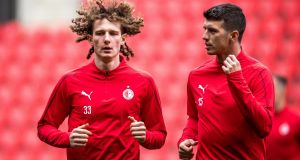 Slavia Prague players Alex Kral and Ondrej Kudela ahead of their clash against Chelsea on Thursday night. Photograph: EPA

To check Slavia Prague’s pulse just keep an eye on the Twitter feed of the club’s chairman. Jaroslav Tvrdik’s stream of consciousness rarely stays pent up for long but, on March 15th, he kept things simple. “When the guys are living their dreams,” he posted alongside a presumably self-made film, suitably jerky, of the players celebrating wildly as they were drawn to face Chelsea in the Europa League quarter-finals. It was the tie they had wanted and now Slavia, a club with a famous history, bring their modern, vibrant and unquestionably conflicting form to their biggest audience yet.

It felt like a moment of arrival when, in the 119th minute of the Czech league leaders’ last-16 second leg against Sevilla, Ibrahim Traoré squeezed in their winning goal and completed a remarkable extra-time turnaround. They had needed to score twice after Franco Vázquez put Sevilla 5-4 ahead on aggregate. Few would back an underdog in that situation but Slavia have never been closer to shedding that tag.

“I would say it’s the strongest Czech team, on a club level, that I’ve seen for a long time,” says Martin Vait, a reporter for iSport.cz.

Slavia are a side who keep on coming at you; one brimming with the team spirit and camaraderie for which the country’s most successful clubs are feted but also packed with quality. Their charismatic, baseball-capped manager, Jindrich Trpisovsky, uses Jürgen Klopp as a model. Accordingly Slavia play flexible, energetic football at a tempo far more consistent than most sides from the former eastern bloc countries tend to manage; it makes them a danger to Chelsea and it is the on-pitch incarnation of an ownership saga that has brought them back from the brink.

The club’s rise is inextricably linked to that of the 50-year-old Tvrdik, a former defence minister in the Czech government who at one stage had a reputation for hapless failure. For years he was nicknamed “Luftjarda” after a failed stint in charge of Czech Airlines. Tvrdik, though, has proved deceptively adept at operating a football club while playing the role of a borderline demagogue who – via Twitter and other means – has the club’s fans eating from the palm of his hand. Some of his contributions include tweeting a picture of three Slavia players naked in the team bath, as well as a photo that purportedly showed a list of Trpisovsky’s transfer targets, but the reality is more hard-nosed.

“I didn’t think he would be this capable,” Vait says. “I thought he’d be this wild, eccentric ex-politician who was trying to make his way in football. But he’s become really astute at what he does.”

Tvrdik has a senior role in the catchily named Mixed Czech-Chinese Chamber of Mutual Co-operation. It is through the relationship between those countries that his role at Slavia crystallised; he is a long-term adviser to the Czech president, Milos Zeman, whose efforts to attract investment into the country from China bore fruit when the energy conglomerate CEFC took over Slavia three and a half years ago.

It extended China’s soft power interests across European football but seemed to have unravelled last year when the CEFC tap dried up, its reported debts of £13.3bn apparently having exhausted patience in Beijing. Tvrdik appeared to have his fingerprints on another bad job but Slavia were bailed out in November when Sinobo Group, a Chinese real estate development company, became the majority shareholder.

They have not looked back although, for supporters of a club traditionally seen as a refuge for intellectuals, liberals and dissidents, not everything sits easily. The link with Zeman, once seen as a progressive social democrat but nowadays an unashamed populist, leaves them there to be shot at where once that was the role occupied by Sparta, their historically more successful neighbours.

On the other hand there is an inclination to enjoy the good times while they can. “There has always been a sentiment around Slavia that trouble is just around the corner,” Vait says of a club that flirted with relegation and financial crisis earlier in the decade. While Sinobo’s ownership appears to offer few long-term guarantees, perhaps it is time Slavia were able to live in the moment.

Chelsea certainly face a battle at the Eden Arena on Thursday night and will see how Miroslav Stoch, the Slovakia winger who made five appearances in a four-year stint at Stamford Bridge, has developed. “He was regarded as a sort of rebel player when he came in, perhaps a reputation of causing problems, but he’s proved people completely wrong,” Vait says.

Stoch, who may play through the middle, is 29 and in the form of his life. Trpisovsky’s penchant for rotation means few players are indispensable and the only one to fit that bracket clearly, the midfielder Tomas Soucek, is suspended. A glance at his teammate Alex Kral might distract Chelsea enough in any case; Kral bears a startling resemblance to David Luiz and operates with a similar intensity.

Perhaps Slavia and their riches will fade again; perhaps they will bloom into the kind of sustainable, long-term European power that would serve their region well. Either way, Tvrdik will presumably be documenting the ups and downs. On Wednesday he shared pictures of the new guest seats inside the Eden Arena in which Chelsea’s delegation will be placed; they looked plush but Slavia hope to provide an uncomfortable Europa League night.