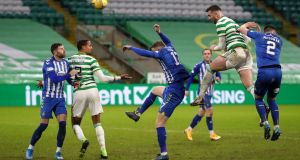 Celtic ensured they lost no more ground on Rangers at the top of the Scottish Premiership thanks to a 2-0 win over Kilmarnock at Parkhead.

The Light Blues had put the pressure on the champions with a 2-1 lunchtime win at Dundee United and Neil Lennon’s side could not get the breakthrough in a goalless first half at Parkhead.

However, Celtic stepped up the tempo after the break and Mohamed Elyounoussi’s drive in the 57th minute opened the scoring although it was not entirely clear if it came off Hoops defender Shane Duffy or Killie’s Aaron McGowan on its way in.

However, there was no doubt that it was Duffy who headed in a second in the 70th minute from a David Turnbull corner.

With their first back-to-back wins since a run of eight successive victories ended in early October, the Hoops leapfrogged Hibernian into second place and back to 13 points behind Rangers with two games in hand.

With more confidence, Lennon, under-fire recently following poor results which have led to fan protests, will turn his attention to the William Hill Scottish Cup final against Hearts at Hampden Park next Sunday, where the Hoops have a chance to clinch an unprecedented quadruple treble treble.

Lennon kept the faith with goalkeeper Conor Hazard and midfielders Turnbull and Ismaila Soro whom he brought in for the morale-boosting Europa League dead-rubber win over Lille at Parkhead on Thursday night.

Celtic came close to getting the opener in the ninth minute when defender Christopher Jullien got on the end of an inviting free-kick from Turnbull but keeper Danny Rogers tipped the header over the bar for a corner which the Ayrshire men defended.

There was little more goalmouth action of note until Turnbull lifted a shot over the bar in the 20th minute after exchanging passes with Edouard and driving into the Kilmarnock box.

Four minutes later there was a Celtic penalty claim when Rogers came out to thwart Taylor on the byline but referee Don Robertson awarded a goal-kick.

Edouard drove wide from 12 yards after being set up by Turnbull but Celtic could not get into top gear, hampered by disciplined opponents.

Rogers beat away a drive from Turnbull just before the break and Lennon’s side stepped it up after the interval.

The Killie keeper did well to parry away a powerful drive from Jeremie Frimpong before clawing away a header from Edouard and then saving a header from Duffy.

However, Celtic’s goal eventually came when Elyounoussi drifted in from the right and fired in a low drive which took a deflection and ended up behind Rogers.

Killie’s resistance was broken and they fell further behind when Duffy rose high to head in a Turnbull corner.

Kilmarnock tried to battle back and Hazard made a good save from Nicke Kabamba following a McKenzie corner.

Amid a flurry of changes, winger Mikey Johnston, back on the bench for the first time this season after recovering from calf injuries, replaced Elyounoussi with 10 minutes remaining as Celtic closed the game out.