Solskjaer can give United fans a much-needed lift 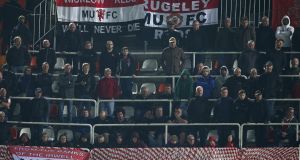 United fans watch on during the 2-1 defeat to Valencia at the Mestalla. Photo: John Peters/Man Utd via Getty Images

With an hour gone in last weekend’s defeat to Liverpool at Anfield, Manchester United were – somehow – hanging on at 1-1. After being battered during the opening half Jesse Lingard’s goal had given José Mourinho’s side a lifeline and stalled the rampant hosts.

Maroune Fellaini was brought on as a half-time substitute but with Paul Pogba, Anthony Martial and Juan Mata still on the bench, Mourinho had the opportunity to do something decisive.

The chance was there to turn a game in which his side had been dominated. A chance to be proactive, rather than reactive.

Yet the manager did nothing. He sat brooding and lifeless on the touchline as his players remained listless and rudderless on the pitch. Eyes were rolled in the lower tier of the Anfield Road End. After another spineless display, United’s travelling support were braced for the grimly inevitable.

Xherdan Shaqiri – an attacking substitution – scored in the 73rd and 80th minutes. It was done. In the freezing sleet on Merseyside, the curtain came down on Jose Mourinho’s Old Trafford tenure.

It was perhaps a fitting end, reflective of the dismal mood which has enveloped Manchester United in the five-and-a-half seasons since Alex Ferguson’s retirement. Mourinho’s appointment in 2016 was divisive but seemed like the right move.

David Moyes’ tenure was a disaster. United were threatening to turn a corner under Louis Van Gaal but the football was dreadful. The Dutch manager had gutted the club of all its characters, replacing them with average players on extortionate wages.

Concerns over Mourinho’s playing style were obvious, but they were offset by the promise of a appointing a serial and proven winner. His Chelsea were champions in 2015. Plus, the United job was Mourinho’s dream. This time, it would be different.

And, at times, it felt like it could be. While they finished a pitiful sixth during his first season in charge, United still lifted two trophies.

The Europa League may have been an open goal in some respects but as well as providing a return to the Champions League, it also gave supporters a memorable night in Stockholm as United completed the full set of trophies.

Having backed Mourinho to the tune of €185 million ahead of his first season in charge, United signed Romelu Lukaku, Nemanja Matic and Victor Lindelof in the summer of 2017.

They started the season brightly and looked set to challenge Manchester City for the title. But then Mourinho waved the white flag at Anfield. A goalless draw sucked the life out of the team and set the tone for what was to come.

Mourinho steered the side to second place in the Premier League – 19 points behind champions City – but his side were beaten by Sevilla in the last-16 of the Champions League after delivering two utterly gutless performances, devoid of any ambition or spirit.

And then, it all began to unravel. The seeds for Mourinho’s sacking were planted during a shambolic summer in 2018, when the club refused to back him in the transfer market. This is despite extending his contract to 2020 that January. The need for the club to buy a senior centre-half was obvious.

Yet chief executive Ed Woodward – the man who advised the Glazer family during the leveraged buy-out of Manchester United in 2005 – decided otherwise.

This failure to recruit properly in the summer – while United’s rivals all strengthened significantly – typifies the way the club has been run since 2005. The Glazer family have siphoned more than €1.1billion out of the club during their 13 years of ownership. And, as long as the club remains commercially successful, they can continue to leach off it.

The genius of Ferguson was such that United were able to remain successful despite gross underinvestment. His departure and the Moyes debacle forced the Glazers to flash spend – more than €700m between 2014 and 2017.

But with Mourinho steering United to second place in 2018, and the club safely in the Champions League, the owners reverted to type. There was a clear lack of ambition and – more pertinently – an obvious lack of faith in the manager.

What promised to be difficult season soon became an utterly shambolic one, culminating in Mourinho’s departure this week. The abrupt manner of his sacking came as a surprise, but ultimately it was inevitable. While it is clear Manchester United’s squad isn’t good enough to compete at the top level, it was also obvious Mourinho wasn’t getting enough out of the players at his disposal.

There were brief flashes – a famous 2-1 victory in Turin, an impressive performance away to Chelsea – but ultimately United were regressing under Mourinho. His relationship with certain players, particularly Paul Pogba, was toxic, while his refusal to drop the likes of Nemanja Matic and Romelu Lukaku contributed to United’s slow, stagnant football.

While the atmosphere in the dressing room was mutinous it never became so on the terraces. Bar the occasional boos at Old Trafford Mourinho has received unparalleled support, and did so until the bitter end on a miserable afternoon in Liverpool.

And now as Mourinho slinks off into the sunset with his hefty payout, United have turned to Ole Gunnar Solskjaer to steady the ship until the summer, when a full-time appointment will be made. On the one hand, Solskjaer’s short-term appointment looks a risk, given his relative lack of top-flight experience and his ill-fated stint at Cardiff.

But on the other, maybe it’s just what Manchester United need.

Going to games had become a chore. Old Trafford is creaking, neglected and often not full. The club’s two biggest rivals are going toe-to-toe for the title, playing football a world away from the stodge served up by United over the past few seasons.

A lot has to change at the club for Manchester United to be challenging again - from the pitch all the way through to the boardroom. A director of football is likely to come in, a coherent long-term plan is needed and the quick-fixes need to stop.

But in the meantime, Solskjaer’s arrival can help turn the club in the right direction. The Norwegian gave supporters the greatest night of their lives on the 26th May 1999. As his old song goes, he makes them happy when skies are grey.

Solskjaer can offer a reminder of the club’s ethos – bring back some vibrancy, some zest, some enjoyment. Promote youth, play direct, fast football.

Gallows humour becomes tiresome after a while. It’s time to have some fun.