‘The way to bring the best out of yourself is to enjoy what you do. We’re a team that wants the ball’ 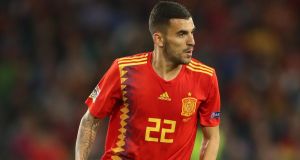 Dani Ceballos: “We’ve got a very good compact side, and the three up front really make the difference.” Photograph: Nick Potts/PA Wire

It starts with a song. Dani Ceballos listens back, laughs, then looks down a little bashfully. “Surprising,” he calls it.

Arsenal fans knew he was good, or hoped so – he had come from Real Madrid, after all – but you don’t leave there unless someone wants you to and few expected anything quite this good, this soon. Even he didn’t. Two assists, more touches, passes and dribbles than anyone, and that moment when he turned full circle, fell and still escaped with the ball obediently by his foot led to a supporters’ serenade. And a Spaniard wondering if that was really his name he could hear.

He is back in Spain, sitting in the sunshine in Las Rozas, the national team’s HQ, taking it all in. Twenty days have passed since victory over Burnley, during which time he got two reminders that it will not always be like that – at Anfield he could barely breathe and he began the north London derby on the bench – but he cannot help smiling. Me encanta, he keeps saying, in the lisping Spanish of the south: I love it.

“I love the city, I love the Premier League and love Arsenal,” he says. “I’m just really, really happy to be part of this great club. I’ve hardly noticed any difference in size between Real Madrid and Arsenal.

“And the fans are very passionate, they love the players. It’s much easier to adapt because they make you feel like you’ve been at the club forever. I love the way everyone’s treated me. They’ve put a lot of faith in me.”

Faith is a recurring theme, opportunity and a sense of place too. The talent has never been lacking. Born and raised, like José Antonio Reyes, in Utrera, Ceballos’s parents sold churros from a van while he played football. “A small, humble town,” he calls it.

Growing up he wore a goofy grin and a swoosh shaved into his head, joined Sevilla at eight, was released at 13 and went to Betis at 17. The day of his trial match they took him off early, having seen enough, to hide him from Real Madrid and Barcelona.

At 20 those two clubs returned, Real beating Barcelona to him. The move, though, has not entirely worked out. That Ceballos believes it still can is underlined by his determination to go to London on loan.

Under Zinedine Zidane opportunities were few: in his first season he was on the field for 16 per cent of Real’s game time. He talked about ostracism, telling Radio Marca: “There comes a time when you see it’s impossible: there were times when Kroos and Modric were injured and he’d change the system to put others in.”

He admitted that, had Zidane stayed, he would have left. Instead Zidane walked out. Then, six months later, Zidane walked back in. Ceballos started one of 11 matches after the manager’s return, employing a personal coach to ensure his level did not drop.

This summer Zidane made little attempt to persuade him to stay. One of the midfielder’s former coaches calls his treatment an aberration. It must be hard not to agree.

“You have to be realistic,” Ceballos says. “The two good games I’ve had so far for Arsenal I never had in two years at Madrid. I didn’t play a lot but it’s also true that when I played I didn’t play as I can. That’s related to confidence but you have to be self-critical.”

On that first day at the Emirates supporters already knew what they wanted: Dani to stay. If doubts were introduced by what came next, they are minor. Liverpool defeated Arsenal and against Tottenham Ceballos was a substitute, raising familiar questions about balance, how to include a player such as him. There’s something in his style, the freedom, the touch of anarchy, that means those will always endure. But the talent remains too great to ignore. Besides, he is adapting, he says. The analysis of his own flaws is striking.

Liverpool, Ceballos says, was quite a lesson. It takes him a moment to order his thoughts.

“I’ve never seen anything like what I saw at Anfield; I haven’t seen a team that plays better, that presses like them, the way the fans carry them along.

“They take the air from you. You spend so much time defending and when you want to do something with the ball, when you want to breathe, they’re back on top of you. They’re very well drilled.”

Is that something Unai Emery seeks to emulate?

“We can’t compare it at the moment. We’re working on some similar things but Jürgen Klopp arrived at Liverpool in 2015. Unai came last season. Arsenal finished a point short of the Champions League and a small step from winning the Europa League; his arrival will be positive. In a few years Arsenal will be in the top 10 teams globally, competing for everything.

“We’ve got a very good compact side, and the three up front really make the difference. You can compare [Pierre-Emerick] Aubameyang to Cristiano [Ronaldo] when he was at Madrid in the sense that he plays close to the goal, he lives for scoring. He’s very important for us, fundamental.

[Nicolas] Pépé is very direct. And [Alexandre] Lacazette, for me, is the best player: he understands the game perfectly and if he’s 100 per cent he’s going to give us so much.

“Fitting all the players together must heat up the manager’s head,” Ceballos says, laughing. “I don’t think the míster repeated an XI in four games, which keeps us alert. Against Tottenham it fell to me to come from the bench and I understood my role.

“Emery knows me well and wants me to show my personality, my desire to learn. I’m still young. I’m passionate about football. I can play as a 10 or an 8, but I feel the responsibility of leading, wanting the ball in difficult moments, not hiding, getting the team playing. That’s what separates the really good players. It’s about saying ‘I’m here’ when the team needs you.

“I try to play happy. The way to bring the best out of yourself is to enjoy what you do. We’re a team that wants the ball, so I feel comfortable. The second half of the season is when people will see my best.

“I’m a player who tries to get at the opposition and make the difference, that offers desequilibrio,” he adds.

Desequilibrio defies easy translation: it means to unbalance a game, tip the scales, and implies some undoing of tactics and formations, a breaking free from the strategic straightjacket.

“It’s true that at times the desire to be near the ball gets the better of me and I can lose my position,” Ceballos says. “I have a big margin for improvement; with experience I can. Unai clearly has faith in me: he’s the one who called and told me to come to Arsenal, because I’d have a prominent role and would like his idea of playing.

“I’ve been pleasantly surprised by his work. When you have the coach’s confidence it’s much easier to perform. I want to repay that. We, footballers, have feelings, just like anyone else. We have our low moments and you have to be very strong mentally. I’d be lying if I said otherwise …

“Knowing the coach believes in you is 60 per cent of it, knowing that if you make a mistake he’ll back you … It’s only been four weeks, so it’s hard to say what I really think yet, but from what I’ve seen it’s the most competitive league in terms of quality and the physical side. It’s the league with the highest standard, the biggest demands. I have to adapt.”

Off the pitch too. While Reyes lived in Cockfosters and was desperate to return to Spain, his mum accidentally telling a radio show she would live in a shack if it meant going home, Ceballos is enjoying England.

“My career’s going to last maybe 15 years and if I’m happy on the pitch, if I’m playing, nothing else matters.”

His mum will soon join the family near London Colney. His girlfriend, in the final year of her teaching degree, is doing English classes with him. The TV is tuned to English only. “In three months I’ll be able to have a conversation,” he says.

And the lifestyle suits. The food too. Even the weather. It is easy to say in late summer; let us revisit that in February. Ceballos laughs. “I’ve been warned about the cold. But I love football here, the way they live and breathe it. I’ve never seen anything like it. You play away and there are at least a thousand fans supporting you.

“I don’t care if it’s raining or snowing. I’m looking forward to playing every three days over Christmas. It’s a great experience.

“I don’t know what I’ll say in a year but now I’m happy. They see the game like I do; I love football like they do. They respect you and a player has to feel wanted. You applaud them and they applaud you back.”

And sometimes they sing your name – even if it is your first day.