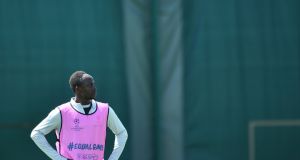 Sadio Mané has said links with Real Madrid are not a distraction because he is happy at Liverpool and with their “incredible” appearance in a second successive Champions League final.

The Liverpool forward has been regularly touted in the Spanish media as a transfer target for Real as Zinedine Zidane commences a much-needed overhaul of the squad. Liverpool have not received nor would entertain an approach for the joint-winner of this season’s Premier League Golden Boot, however, and Mané has reiterated his contentment with life at Anfield.

The 27-year-old signed a new five-year contract this season, describing his commitment to the club until 2023 as “the best decision in my career”, and that view has been strengthened by the team’s latest shot at European success under Jürgen Klopp.

Mané said: “This is always part of football so we have to deal with it but for me the most important thing is Liverpool and I’m happy here. I’m preparing for one of the biggest games for the club and the fans and the players as well, so let’s focus on this one first and win it. It’s always a pleasure that this kind of team wants you but don’t forget Liverpool. We beat big teams.”

That list includes Barcelona, who finished 19 points above Real in winning La Liga, and Mané believes Liverpool’s form throughout the campaign gives cause for confidence against Tottenham. Missing out on the Premier League title by a point from Manchester City is, he insisted, an extra motivation to win in Madrid.

The Senegal forward added: “I think it’s incredible [to be in another final] and I’m so positive. We know we have targets – we wanted to win the league and the Champions League. We didn’t win the league but we still have one trophy to play for so we are going to try to give everything to win it. Everybody’s ready to win.

“We would have loved to win the league but we have to take it as a positive. It will give us more motivation.”

Mané believes the three-week break between the domestic season and the Champions League final has “refreshed everyone”, and Liverpool will “go to Madrid with fresh legs”. He admits the manner of defeat in Kiev 12 months ago can also help the bookmakers’ favourite on Saturday.

“I think we learned a lot from that final and now we can use our experience to get what we want,” he said. “Every time it makes it easier. We know how to deal with this kind of situation now.” – Guardian