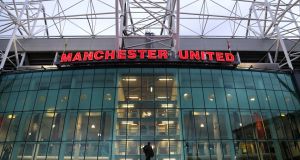 Manchester United have felt the financial pinch amid the coronavirus crisis, with executive vice-chairman Ed Woodward vowing to “weather these challenges” as a return to action edges closer. Photo: Richard Sellers/PA Wire

Broadcasting revenue fell by £27.8m (€31m) to £26m (€29m)– a decrease of 51.7 per cent – because of a £15m (€16.6m) Premier League rebate to broadcasters following the delay and changes to the broadcast schedule for the 2019-20 season, non-participation in the Champions League and the impact of playing two fewer Premier League away games.

Matchday revenue for the quarter was also down, by £2.6m to £29.1m, because of the postponement of the last-16 Europa League home game, one Premier League away game and the FA Cup quarter-final at Norwich.

“Since the start of the pandemic, Manchester United and our Foundation have provided assistance to hospitals, charities and schools in our communities, as well as support for frontline workers and vulnerable fans,” said Woodward.

“These actions reflect our core values as a club and the resilience through adversity that we have demonstrated many times throughout our long history and will do so again to weather these current challenges.

“In that spirit, we look forward to the team safely returning to the pitch and building on the exciting momentum that Ole [Gunnar Solskjær] and the players had previously achieved, while taking all necessary steps to protect public health. Our thoughts remain with all those affected during this unprecedented time.” – Guardian

1 Serpentine stays on from the front to steal Epsom Derby for Aidan O’Brien
2 Eamon O’Shea: We spent quite a bit of time talking about older people rather than to them
3 Monica Seles: The warrior queen who could have been the best ever
4 Matt Williams: Six Nations must recognise the desire for revolution outside Europe
5 Chelsea make light work of Watford to move back up to fourth
Real news has value SUBSCRIBE