Champions forced to come from behind away to Chievo 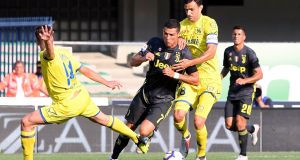 Juventus’ Cristiano Ronaldo in action with Chievo’s Mattia Bani and Ivan Radovanovic during the Serie A game at Stadio Marc’Antonio Bentegodi in Verona. Photograph: Alberto Lingria/Reuters

Juventus came from behind to snatch a dramatic 3-2 win at Chievo as Cristiano Ronaldo made his debut for the Italian champions on Saturday, although the Portuguese was not among the scorers in his first Serie A match.

Ronaldo, signed from Real Madrid in July, was thwarted several times by veteran Chievo goalkeeper Stefano Sorrentino and his handball in the build-up led to a late Juventus goal being disallowed, following a VAR review.

Napoli, last year’s runners-up, gave new coach Carlo Ancelotti a winning start on his return to Serie A after a nine-year absence when they came from behind to win 2-1 at Lazio in the other match on Saturday, the opening day of the new season.

Sami Khedira put Juventus ahead in the third minute after Giorgio Chiellini knocked down a Miralem Pjanic free-kick as they got off to an ideal start in their bid for an eighth successive title.

Chievo looked outclassed but levelled out of the blue when Mariusz Stepinski was allowed a free header from Emanuele Giaccherini’s cross seven minutes before the break.

It got worse for Juventus when their former player Giaccherini was tripped by Joao Cancelo and converted the penalty against his former club to give Chievo a shock lead in the 56th minute.

Juve levelled when Chievo defender Mattia Bani, under pressure from Leonardo Bonucci, deflected a corner into his own net in the 75th minute.

Juve thought they had won the game when Mario Mandzukic headed home in the last minute but, after a lengthy VAR review, the referee ruled that Ronaldo had handled the ball in the build-up and it was disallowed.

Sorrentino was injured in the incident and was prostate on the ground receiving treatment while players argued around him.

In the next attack, Alex Sandro made a weaving run down the left and his low cross was turned in by Federico Bernardeschi.

Five-times world player of the year Ronaldo nearly grabbed an early Serie A goal when he shot narrowly wide from the edge of the area shortly after Juve’s opener.

In the second half, he was foiled when Sorrentino made a brilliant one-handed save from his dipping shot and again when the goalkeeper blocked his free kick.

He had another attempt deflected on to the roof of the next by Fabrizio Cacciatore.

Juventus coach Massimiliano Allegri was pleased with Ronaldo’s performance but not at the way his side allowed Chievo back into the match.

“We dropped our guard because we thought the game was in hand,” said Allegri, who has won the league and cup double in each of his four seasons at Juventus.

“We needed this reminder right from the start that every match in Serie A is difficult and nothing is to be taken for granted.”

Ancelotti, who has won league titles in England, France and Germany and the Champions League with Real Madrid since leaving AC Milan in 2009, watched his new team make a slow start against Lazio.

Ciro Immobile gave Lazio the lead with a superb individual goal in the 25th minute as he controlled the ball, left three defenders in his wake and curled a shot past Orestis Karnezis.

Arkadiusz Milik had a goal disallowed on the stroke of half-time after a long VAR review, which found that Kalidou Koulibaliy had committed a foul in the build-up, but levelled in the next attack from close range.

Napoli went in front when Lorenzo Insigne curled in a brilliant finish in the 59th minute and never looked in danger after that.

1 Heroic insanity: When Michael Dunlop raced home in memory of his father
2 Tyrone player claims some counties training in breach of Covid-19 rules
3 Players focus more on life outside game due to lockdown, says GPA
4 O'Sullivan may face action by WPBSA
5 Will Smith made a bags of Bagger Vance
Real news has value SUBSCRIBE
Crossword Get access to over 6,000 interactive crosswords