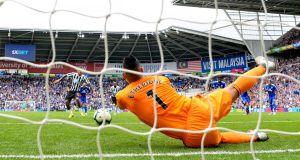 Neil Etheridge of Cardiff City dives to save Kenedy’s late penalty and earn his side a point against Newcastle. Photograph: Dan Mullan/Getty

Neil Etheridge was the Cardiff hero as his stoppage-time penalty save prevented 10-man Newcastle from winning an eventful Premier League contest which finished 0-0.

Kenedy stepped up to take the spot-kick but his weak effort was palmed out by Etheridge in what was the final moment of action, capping a miserable afternoon for the Brazilian.

Etheridge has now saved penalties in his first two Premier League games, after also denying Bournemouth from the spot on the opening weekend.

Newcastle were reduced to 10 when Hayden, a half-time replacement for the injured Javier Manquillo, was shown a straight red card with referee Craig Pawson deeming his 65th-minute tackle from behind on Josh Murphy dangerous.

Newly-promoted Cardiff had been the dominant side in the second period before Hayden’s departure and pushed for the winner before a partisan 30,000-plus crowd.

Newcastle rode their luck at times and there could be added concern for them after Kenedy appeared to kick out at Cardiff’s Spanish midfielder Victor Camarasa in the first half.

The incident was not spotted by Pawson and his fellow officials and the Brazilian forward, on loan from Chelsea, faces the prospect of trial by video and a possible three-match ban.

Both sides had chances in a lively start spiced up by a rash Matt Ritchie challenge which saw the Newcastle wideman cautioned.

Joe Ralls’ corner detected the unmarked Sol Bamba and his header might have ended up in the net but for Ayoze Perez thrusting out a leg to block.

Moments later Perez was in more familiar attacking territory as he broke in to the left-hand channel to force a fine stop from Etheridge.

There was a sharp physical edge to the contest with Manquillo booked for hauling down Josh Murphy and Kenedy tangling with Camarasa.

Cardiff created little in open play until the 38th minute when Ralls spied Joe Bennett making ground down the left.

Bennett lobbed the ball towards the penalty spot where Kenneth Zohore, under pressure, diverted his header just wide of the post.

But Etheridge’s status as the busier of the two goalkeepers was enhanced when he immediately excelled himself after Perez had latched on to Jonjo Shelvey’s sweeping ball to the far post.

Manquillo was injured just before the break and he did not reappear after the interval to add to Newcastle’s defensive problems.

The Spaniard was only playing because regular right-back DeAndre Yedlin had been injured in the opening game against Tottenham.

Zohore failed to find the target again from Ralls’ cross, but Newcastle were now having to weather increasing Cardiff pressure.

Shelvey cleared desperately from under his own crossbar with Camarasa fast approaching behind him before Hayden lost his composure and was banished.

Newcastle sent on Jacob Murphy to share the same pitch with his twin Josh and provide a real football rarity.

It was only the second time that twins had shared the same Premier League pitch after the Keanes, Michael and, Will, during a Burnley-Hull game in September 2016.

Harry Arter, impressive on debut, fired wide and Zohore botched another header in the closing stages before Etheridge’s late heroics.