Bournemouth come from behind to sink West Ham 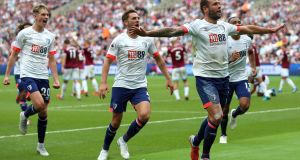 West Ham’s expensively assembled squad crashed to a second straight defeat after Bournemouth came from behind to win 2-1.

Manuel Pellegrini’s first taste of the London Stadium ended in frustration as goals from Callum Wilson and Steve Cook made it two wins from two for the Cherries.

The West Ham board may have splashed out on nine new players over the summer, but on this evidence it seems £100million does not guarantee positive results.

Jack Wilshere was anonymous, record signing Felipe Anderson not much better, and defender Fabian Balbuena was constantly exposed by Wilson in a torrid second half.

Marko Arnautovic, last season’s player of the year, had fired the hosts into the lead with a first-half penalty, but after the break they played like strangers for the second week in a row.

Pellegrini had reacted to last weekend’s 4-0 thumping at Liverpool by omitting Declan Rice, Michail Antonio and new signing Ryan Fredericks, none of whom were injured, from his squad.

Instead there was a surprise start for Robert Snodgrass, who was so far down the pecking order last season he spent most of it on loan at Aston Villa.

Javier Hernandez also got the nod in attack alongside Arnautovic, and the two combined to create the first chance with Cherries goalkeeper Asmir Begovic denying the Mexican at his near post.

However, moments later, Bournemouth carved open the West Ham defence, David Brooks playing in Wilson who was denied by a superb save from Lukasz Fabianski.

But West Ham were looking the more threatening and the pressure told in the 33rd minute when Anderson found Hernandez on the edge of the six-yard box.

Hernandez turned back inside Nathan Ake, who slid in and took the striker’s foot from underneath him, and after a long chat with his assistant, referee Stuart Atwell gave the spot-kick.

Arnautovic stepped up ahead of regular penalty-taker Mark Noble and drilled his shot low past Begovic.

Arnautovic almost had a second before half-time, Begovic getting down well to keep out his deflected effort.

But the warning signs were there for the hosts. Brooks should have equalised but headed weakly wide, and early in the second half the same player saw his shot well blocked by Fabianski.

Bournemouth also had a strong case for a penalty when Noble barged into Ryan Fraser in the area but referee Stuart Attwell waved play on.

Then, on the hour mark, Wilson picked up the ball near the halfway line and begun to weave through West Ham.

The striker shrugged off challenges from Noble, Balbuena, Pablo Zabaleta and Angelo Ogbonna before rolling in his fifth goal in five appearances against the Hammers.

Five minutes later Ogbonna fouled Brooks in the cormer and from Fraser’s free-kick, Cook stole in to thump a downward header past Fabianski.

Pellegrini turned to more new signings. Andriy Yarmolenko, Carlos Sanchez and Lucas Perez were all summoned from the bench, yet it made no difference.

West Ham remain a work in progress, but with matches against Arsenal, Manchester United and Chelsea soon they could well be playing catch-up by the time September is out.