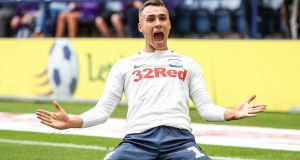 Republic of Ireland forward Graham Burke opened his Championship goal account in Preston’s 2-2 draw with Stoke at Deepdale on Saturday.

The 24-year-old former Shamrock rovers player had opened his club account in the Carabao Cup midweek and scored deep into stoppage-time at the end of the first half to give Preston a 2-1 lead at the break.

In the end Preston had to settle for a point after former England striker Peter Crouch came off the bench to score his 200th senior goal for Stoke.

Preston made the more energetic start and almost went ahead when Callum Robinson’s deflected second-minute cross was headed goalwards by Lukas Nmecha and Jack Butland claimed the looping effort.

Declan Rudd showed remarkable reflexes at the other end to keep the game goalless five minutes later when he kept out Saido Berahino’s header after he met James McClean’s pinpoint cross.

The Lilywhites responded through Burke’s right-wing cross to Robinson at the far post and his 13th minute header crept agonisingly wide.

England goalkeeper Butland produced a stunning double save to deny Irish midfielder Alan Browne, first parrying a header before claiming the Preston man’s hooked shot on the rebound before 25 minutes.

After a stoppage when tempers flared following Paul Gallagher’s challenge on Joe Allen and its aftermath, referee Andrew Madley showed no hesitation in pointing to the spot following Potters defender Tom Edwards handling in the box – and Gallagher stepped up to fire home five minutes before the break.

But Stoke were level when Preston failed to properly clear their lines and Erik Pieters fired a fierce 42nd minute effort into the roof of the net.

However, Preston regained the advantage in the fifth minute of first-half stoppage time when Robinson’s attempted shot fell perfectly for Burke at the back post to volley home emphatically.

Burke struck an effort into the ground towards Butland when play resumed, before Tom Ince’s volley at the other end from Allen’s half-cleared 56th-minute free kick rocketed just over Rudd’s goal.

But veteran striker and substitute Crouch rose highest on the hour in a crowded box to nod home Allen’s free-kick and draw the Potters level once more.

Crouch cushioned Pieters’s 66th-minute cross just over as Stoke looked rejuvenated, before Gallagher lashed a low effort wide at the other end with fewer than 20 minutes left.

The hosts came closest to a winner when, in the 87th minute, Robinson’s corner was headed back across goal by Tom Clarke and Andrew Hughes nodded over.

Inside the world’s largest sports air dome just outside Knock 08:30
The weird and wonderful world of Memphis Depay 08:15
Matt Williams: Players’ sacrifice must outweigh the rest of society 07:00
Lebanese roots keep things in perspective for Michael Cheika 06:00
Whereabouts rule harsher on some athletes than others 06:00