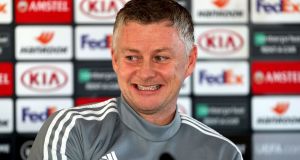 Manchester United manager Ole Gunnar Solskjaer during a press conference in Manchester where he confirmed he would again be considering reserves and academy products to face AZ Alkmaar at Old Trafford. Photograph: PA .

Ole Gunnar Solskjær said his decision to rest senior players for the arduous trip to Kazakhstan last month is behind Manchester United’s impressive performances in the past two weeks, with the club up to fifth after beating José Mourinho’s Tottenham and Pep Guardiola’s Manchester City.

With qualification for the Europa knockout stage assured an extremely callow United side lost in Astana, though they will finish top of their group as long as they avoid defeat by AZ Alkmaar at Old Trafford in the final group game on Thursday. Solskjær confirmed he would again be considering reserves and academy products, while sending out a team capable of winning.

Nemanja Matic is ready to make a comeback after two months out injured, though Paul Pogba will have to wait a little longer. Solskjær said he expected to see Pogba in action before the end of the year but will not be rushing the midfielder after missing the past 14 matches.

“When you play well and get good results of course it can affect the mood around a club,” Solskjær said, “though as a group we have always had a lot of belief. It feels just the same on the inside, even if our last two wins have changed perceptions a little from the outside.

“I see these boys every day in training and I know we are on the right track. I’ve not been that worried even when the results were not going our way. We took a decision not to tire out the first team with a long away trip in the last round and I think being able to stay at home allowed the players to recharge; hence the energy we were able to show in the last two matches.

“Now we would like to win our last game to give ourselves the best chance in the later stages. Manchester United should always be about trying to win each game in any case. At this club it is not an option to say you are not bothered about winning. I’m never going to send a team out saying I don’t care if we win or lose … We are hoping to go all the way like United did two years ago. Once you put a few wins together it is important to try to keep on winning.”

United are preparing to celebrate a unique achievement against Everton on Sunday, when the number of consecutive games in which they have had at least one academy graduate in their match-day squad will reach a staggering 4,000. This sequence dates back to 1937 and Solskjær is certain it will continue. “We will definitely go on a long way past 4,000 – it’s a tradition the club is very proud of. It’s part of our make-up; at this club we always like to give young players a chance.”

Solkskaer also paid tribute to his Brazilian midfielder Fred, who along with Jesse Lingard was on the receiving end of spectator abuse at the Etihad Stadium last week, a disappointing reward after winning over many of his early-season critics with his recent performances.

“This isn’t how it should be in football but Fred knows how highly he is regarded here,” Solskjær said. “He has had the confidence of the coaching staff from day one but his present form is all down to him. He’s been working really hard and now everyone can see how well he is performing at the top level.”

1 Gordon D’Arcy: the next fear for Irish rugby is England in Twickenham
2 Seán Moran: Fallout from Tyrone final celebrations will concern GAA
3 Discussions underway to add more South African franchises to Pro14
4 Born to ride, born to win: Sam Bennett, the making of a green machine
5 Pro14 teams need private planes to keep show on the road
Real news has value SUBSCRIBE
Crossword Get access to over 6,000 interactive crosswords