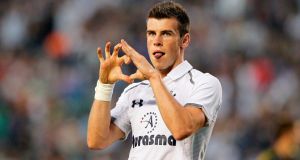 Gareth Bale of Tottenham Hotspur will be a target for Real Madrid this summer. Photograph: RicTapia/Getty Images

Florentino Perez admits Real Madrid would have no qualms paying big money for Tottenham Hotspur’s Gareth Bale, but he says they need to wait for their new coach to be appointed before making any moves.

Perez has not hidden his admiration for Bale and he insists that the club would have no problem paying what is needed, with claims that Spurs would demand a world record £85 million for the Welshman. But Perez - who began the ‘Galactico’ way of thinking at the club - insists that big money buys, such as Bale, pay for themselves.

“Madrid always want the best. Tottenham is a very amicable club, but first we must see who our new coach will be and after that we will begin to arrange our new squad,” he told Marca. “I think the same as if we were to have a tennis team and Rafael Nadal asked me for these millions. For players like this - the investment they generate you and the revenue they produce, you can give everything to try and get them.

“I demonstrated in 2000 that with players like this you can change the dynamic, going from losing to winning. Then you have to look carefully at the player involved. We are not going to talk too much about Bale because he plays at a very amicable club and they will be annoyed by too much talk about him. I know their chairman well and he doesn’t like things like that.

“But I repeat, we have a long list, but there will be one particular player, of course.”

Perez also spoke about Gonzalo Higuain and he insisted that no club has yet made contact with Real Madrid - despite Juventus and Arsenal both reportedly opening talks with the player.

He also warned any club that they would not get Higuain on the cheap.

“To date no team has told us of his interest in Higuain. I do not know what will happen tomorrow,” he said.

But on Higuain’s reported fee of £25 million, he warned: “With £25 million it’s better that they don’t come. Let’s see if people ask us for £50 million for everyone and we sell one of ours for half that.”