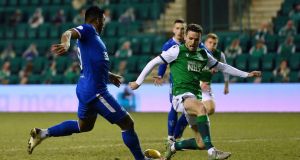 Alfredo Morelos left his mark on Hibernian in more ways than one as the striker fired Rangers another huge step closer to the title with a 1-0 win at Easter Road.

The Colombian could easily have been sent off inside 15 minutes after appearing to stamp on Ryan Porteous.

But with the full extent of the incident missed by referee Kevin Clancy, he was free to slot home the only goal of the game.

Rivals Celtic returned to winning ways with a comfortable 2-0 victory over Hamilton at Parkhead.

After four Scottish Premiership games without a win for the first time since 2000, the Hoops looked a bit more like their old selves against the league’s bottom side.

Leigh Griffiths fired in a long-distance opener after 11 minutes and returning strike partner Odsonne Edouard added a neat second early in the second half.

However, the nine-in-a-row champions remain 23 points behind Rangers.

A dramatic double-salvo proved enough as Livingston secured a 2-0 triumph over Kilmarnock and extend their unbeaten run in all competitions to 12 matches.

A stodgy encounter appeared destined to end in stalemate until 20-year-old Jaze Kabia, a January capture from Shelbourne, notched his first-ever goal for the Lions after 87 minutes.

With Killie rattled, the tireless Scott Pittman, celebrating his 250th outing for the club, immediately rippled the net to make the points safe.

The visitors took the lead in the 30th minute when Joe Shaughnessy headed past United keeper Deniz Mehmet.

St Mirren increased their advantage 12 minutes later when they were awarded a penalty by referee John Beaton for a push on Shaughnessy by Mark Reynolds in the United box. Jamie McGrath stepped up to calmly send Deniz the wrong way.

The Buddies then made it three on the stroke of half-time after Lawrence Shankland was adjudged to have handled a shot, and McGrath again made no mistake with the spot-kick.

The Tangerines pulled one back in the 54th minute following a long-range strike from Ian Harkes.

But St Mirren put the game to bed in the 80th minute with a clinical break and finish from substitute Dylan Connolly. Five minutes later the rout was completed by a Kristian Dennis tap-in.

Motherwell came from behind to claim all three points for the first time this season with a 2-1 win at fellow strugglers Ross County.

Second-half goals by Devante Cole and Bevis Mugabi saw the Steelmen leapfrog County in the table, after Oli Shaw had given the hosts the lead in the 14th minute.

Elsewhere, Ibrox-bound Scott Wright started for Aberdeen against St Johnstone but neither he nor anyone else at McDiarmid Park could supply the inspiration in a goalless draw.