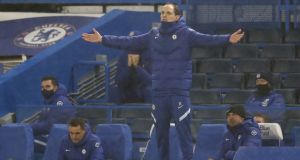 Perhaps the pace of change was too abrupt. The “In Frank We Trust Banner”, unveiled a mere day before the latest brutal sacking of the Roman Abramovich era, was still hanging from the Shed End for the start of Thomas Tuchel’s reign. Chelsea have barely had time to think since firing Frank Lampard and, given that the new boss has the princely sum of one training session under his belt, it was not entirely surprising that the off-field drama ended up being more exciting than the actual football.

Like Lampard before him, Tuchel did not know how to get the best out of his expensively assembled squad. The German’s introductory lineup, featuring Callum Hudson-Odoi at right wing-back, felt overthought. With Mason Mount reduced to a late cameo and Timo Werner an unused substitute, Chelsea were easily held to a goalless draw by Wolves and lie five points off the top four.

It was an odd occasion. In normal times there might have been howls of discontent from supporters still seething at Lampard’s sudden departure at the start. As it was dissent was largely confined to social media, save for a group of fans mounting a socially distanced protest at the start of the day.

There was no grand entrance from Tuchel when he emerged just before kick-off. He headed straight to the bench, sharing a few vigorous hugs with his backroom staff before marching out to his technical area to bark out a constant stream of instructions, focusing in particular on Hudson-Odoi, whose unfamiliar role represented the clearest sign of change.

A new era was underway, though anger was still simmering away in the background at Lampard’s sudden departure on Monday morning. Tuchel’s first matchday had started on a rancorous note when a group of Chelsea fans voiced their disapproval at the club’s latest managerial change by letting off blue smokes and hanging a banner reading “Circus Continues” on a gate outside the ground.

Yet Tuchel, who was appointed on Tuesday, could not concern himself with the past. His first lineup certainly caused a stir. The German went with experience, restoring players who had not seen eye to eye with Lampard. Antonio Rüdiger joined César Azpilicueta and Thiago Silva in a back three. Mount was dropped after captaining the side in Lampard’s final game, that farewell win over Luton Town in the FA Cup, and Hudson-Odoi was the only academy product handed a start.

There was not even a spot on the bench for Billy Gilmour, who could go on loan before the transfer window shuts. Yet Chelsea would be wise to think twice before allowing Gilmour to leave. They could have done with his imaginative passing during a first half in which Jorginho and Mateo Kovacic struggled to assert themselves in central midfield, offering little of the drive that Mount usually provides.

Chelsea had looked to make a fast start, pressing high and fizzing the ball around. Hudson-Odoi was eager to impress, breaking clear of Rayan Aït-Nouri and crossing for Olivier Giroud, who fluffed his lines at the near post.

There were encouraging patches from Chelsea as Hakim Ziyech and Kai Havertz floated dangerously, swapping positions behind Giroud. Havertz, who has disappointed since his move from Bayer Leverkusen, caught the eye with one surging run deep into the Wolves area before running out of space. Yet clear opportunities were rare. Led by Conor Coady in defence, Wolves were comfortable. The visitors combined organisation with a threat on the break and might have led in the 40th minute, only for the unmarked Leander Dendoncker to head over.

Chelsea were spending a lot of time passing the ball in front of Wolves, who were successfully turning the game into a chore. They were retreating into bad habits that held them back under Lampard, sending in an endless stream of crosses as ideas began to dry up. Ziyech’s schemes were not coming off and Havertz was starting to drift. There was a lack of conviction in the final third and it was beginning to feel that using Hudson-Odoi, whose starting position was too deep at times, in an alien role was a misguided experiment.

With Wolves refusing to push up, Chelsea needed more imagination and precision. After 61 minutes there was a rare glimpse of Tuchelball as Kovacic slid a gorgeous ball through to Havertz, who pulled the ball back for Ben Chilwell to fire over.

It was a rare moment of incision. Tuchel was growing exasperated with his side’s air of desperation and there was an escape for Chelsea when Daniel Podence’s backheel released Pedro Neto, who scooped his shot on to the bar.

Tuchel turned to his bench, introducing Christian Pulisic for Chilwell and Tammy Abraham for Giroud. Pulisic almost made an impact, whipping over from the edge of the area, and Hudson-Odoi saw a deflected effort saved by Rui Patrício. Yet it felt flat. The final whistle, blown just after Havertz had missed a header, was confirmation that Tuchel needs time. – Guardian