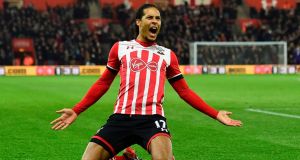 Liverpool have signed Southampton’s Virgil van Dijk in a deal that will make him the world’s most expensive defender. Photograph: Getty Images

Virgil van Dijk appears delighted his long-projected move to Liverpool will go ahead and everyone else involved in the world-record £75m deal has a reason to be just as happy.

Southampton may not have had any particular desire to lose the player but they have been well aware for at least half a season a move was on the cards and have played their role as a selling club to perfection. Liverpool’s offer of £60m last summer was already a lot of money but the Saints made a principled stand over what they considered an illegal approach, occupied the moral high ground as the Merseyside club beat an undignified retreat and ended up with the best financial deal imaginable for a defender they were resigned to losing.

Liverpool have paid over the odds, there can be little doubt about that but setting a record for a defender nails two nagging doubts at the same time. First, Liverpool needed a central defender. Their rearguard has been something of a joke this season, with the Fab Four up front effectively performing against a backdrop designed to give opponents a chance.

Second, Liverpool needed to make this move happen, they faced potential competition from Manchester City and Chelsea, and they have been both bold and decisive. This is not like paying £35m for Alex Oxlade-Chamberlain then wondering how to fit him into the team, this is, or ought to be, the start of an era at Anfield. If Van Dijk is to be the keystone of a new defence then Liverpool can start answering the critics who accuse them of not being a complete team.

Jürgen Klopp will probably need to add a goalkeeper too for his commitment to all areas of the pitch to convince everyone – Paris Saint-Germain’s Kevin Trapp is the latest name in the frame to replace the beleaguered Simon Mignolet – but that could happen this January if Liverpool are serious about becoming “best of the rest” behind City in the second half of the season.

In the ideal scenario that would involve a successful campaign in the Champions League before the thorny issue of Philippe Coutinho and Barcelona raises its head again. Liverpool are aware the Fab Four will not be around forever – indeed Sadio Mané is beginning to find himself on the sidelines – and as the attraction of Barcelona for Coutinho pretty much replicates that of Anfield for Van Dijk this could be Klopp’s only chance to make an impression on Europe before the front of the team needs attention again. Assuming Liverpool can keep Coutinho until the summer – they may need to take their cue from the resolve shown by Southampton – if they can stiffen their defence they should have a reasonable chance in Europe.

With the Premier League all but decided and Porto waiting in the next round, Liverpool can afford to give the Champions League their best shot. Klopp has experience of taking a side to the final with Borussia Dortmund in 2013 and perhaps feels he has unfinished business in Europe after losing to Bayern Munich at Wembley and also missing out to Sevilla after reaching the Europa League final in his first season at Liverpool.

That game in Basel saw Liverpool score first but succumb to second-half goals, a pattern that has repeated itself on several occasions. Klopp inherited a defensively flawed team from Brendan Rodgers and to the consternation of supporters has never seemed in any rush to address the problems. Now he has, and whereas Van Dijk may have been just another option in central defence for City or Chelsea, he comes to Liverpool as the main man, the first part of an answer to a weakness that has demonstrably been holding the club back.

The player has shown at Celtic and Southampton he is good enough to lead a defence, the only slight worry, especially as he could make his debut in next week’s FA Cup Merseyside derby, is the weight of expectation. This is partly a result of waiting so long and then paying a world-record fee for a single defender. If Liverpool continue to concede silly or sloppy goals, and they might, because some of the usual defensive suspects will still be around, Van Dijk could quickly find himself both in the spotlight and under pressure. Record signing or not, one player is unlikely to be able to rectify all the issues in a defence suspect for some time.

Yet perhaps that is looking too far ahead. This is a start. The main consideration for Liverpool fans at the moment is Klopp is not oblivious to their defensive concerns after all and there may be further recruitment. It is a moot point whether the Fenway Sports Group has suddenly become imbued with the spirit of Christmas and become generous overnight, or whether it is already spending the proceeds of the envisaged sale of Coutinho but in the end this was a transfer that just about everyone wanted to happen.

Even Southampton, not exactly strangers at selling to Liverpool, now have a little money to spend. The transfer window is not even open and already a record has been set. One might have thought, in a season where the destination of the title also seems to have been confirmed before the opening of the transfer window, that a quiet January would result. Early indications suggest quite the opposite.