Ken Early: City are the best team but Liverpool are winning ugly 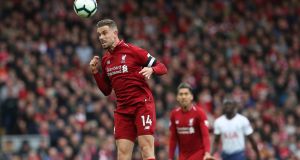 Liverpool’s captain Jordan Henderson in action. Jurgen Klopp’s loyalty to him tells us a couple of interesting things about the Liverpool manager’s way of thinking. Photograph: Getty Images

Last week, Louis van Gaal gave an interview to the BBC in which he said that Ajax played better in the first leg of their Champions League tie against Real Madrid, which they had lost 2-1, than in the second leg, which they won 3-1.

Of course they had been praised more for the win rather than for the defeat, prompting van Gaal to remark: “The media do not analyse the game, they analyse the result.”

It’s an argument you often hear from the “process” school of football managers who have a philosophy on how to play the game. Van Gaal’s compatriot Co Adriaanse would accuse journalists of “scoreboard journalism”, and Juanma Lillo expressed the same idea in an interview with Sid Lowe: “We praise what ends well, not what is done well.”

All of which perhaps suggests that coaches like van Gaal, Adriaanse and Lillo understand football better than they understand people.

On the technical level, Liverpool against Tottenham was a bad game of football between two teams both performing far beneath their best level. On the emotional level, it was a white-knuckle thrill ride with an incredible ending that left Liverpool drunk on “this is our year” euphoria.

A last-minute winner in a scrappy game might not magically transform all the bad football that has gone before it into good football, but it surely transforms the future and how everybody feels about it.

Had Hugo Lloris not inexplicably dropped Mohamed Salah’s header on to Toby Alderweireld’s foot, then impeded Alderweireld’s attempt to clear the ball as it trickled over Tottenham’s line, it would feel this morning as though the title was Manchester City’s to lose. Instead City are back down to second, knowing they have no margin for error.

Jurgen Klopp again reverted to the much-criticised Wijnaldum-Milner-Henderson midfield three that he has selected for many of Liverpool’s biggest matches of the season, including the away games against PSG, Napoli, Chelsea and the Manchester clubs.

Liverpool lost three and drew two of those five matches, scoring only three goals in the process, which is not the sort of big-game record you usually associate with champions.

Liverpool set about Tottenham with a plan to stretch Spurs’ three-man defence with cross-field passes and one of these moves created the opening goal, with Henderson’s pass finding its way to Robertson, and Firmino evading Sanchez and Vertonghen to head in the cross.

The goal wouldn’t have happened if Christian Eriksen hadn’t inadvertently deflected Henderson’s pass advantageously into Robertson’s path, so the Liverpool full-back could run on to a ball that he otherwise would have had to stand and wait for.

It was one of a series of sub-par passes from Henderson which, particularly in the first half, were one of Tottenham’s main sources of creativity. When you pass the ball this sloppily against opponents like Eriksen and Dele Alli you lose any chance of controlling the match.

“Liverpool had £100 million of midfielders on the bench, Fabinho and Keita, and we were better than them there,” Mauricio Pochettino said, and nobody could argue with that.

Henderson has the habit of shouting at himself after a mistake, as though this is something that hardly ever happens. He was too busy shouting at himself after the referee penalised him for fouling Harry Kane near halfway to notice that Kane was about to take the free-kick quickly. Kane’s fantastic diagonal pass found Kieran Trippier in the move that led to Tottenham’s equaliser.

It’s hard to imagine Guardiola tolerating this standard of play from a central midfielder, yet Klopp’s trust in Henderson apparently remains undimmed. His loyalty to the captain tells us a couple of interesting things about the Liverpool manager’s way of thinking.

His approach to team-building is evolution rather than revolution – the team hierarchy changes only gradually. This is why expensive signings like Alex Oxlade-Chamberlain, Fabinho and Naby Keita have spent much of their first seasons at Liverpool watching from the bench.

We can also see that in the toughest games, Klopp trusts in strength and energy over technical ability.

Fabinho at his best combines all these qualities, and he eventually replaced Henderson with 14 minutes to go. Immediately he began to influence the match with the sort of quick, accurate interventions that made you wonder why Klopp had taken so long to use him. If Lloris had not made that late mistake, the criticism of Klopp’s team selection would have been intense.

But Lloris did make that mistake, and Klopp was celebrating in front of the Kop rather than irritably justifying a failed team selection. We praise what ends well. Liverpool showed again that supposed attribute of champions – the knack of winning while not playing well.

This is a quality that City have not been able to demonstrate, because they’ve played well in almost every match for the last three months. Their record in 2019, which began with that pivotal 2-1 victory over Liverpool, is almost perfect: played 20, won 18, lost one – the solitary defeat coming at Newcastle, where they took the lead after 24 seconds and forgot to close out the game.

And yet Liverpool are top. City’s players could analyse this latest Liverpool victory and conclude that although it ended well, it wasn’t actually done very well at all.

On yesterday’s evidence, City are the best team in the league. But since City’s players are human, the fact that the match ended so well for Liverpool might seem more relevant just now than the shortcomings in the process.

They say that the best team always wins the title, but isn’t that the biggest scoreboard journalism cliché of them all?