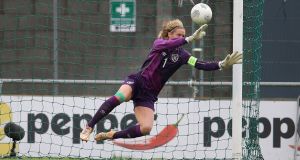 Republic of Ireland women’s team captain and goalkeeper Emma Byrne has announced her retirement from international football after 21 years of service.

The 38-year-old has opted to call time on a stellar international career that has amassed 134 senior caps - which is a record total for the women’s national team.

Byrne made her senior debut at the age of 16 in March 1996 and went on to have a profound impact on women’s football in Ireland by becoming a role model for her performances on the pitch.

The Kildare native is also one of the most decorated Irish players at club level having won 11 English League titles and the Uefa Women’s Champions League, amongst many other honours with her former club Arsenal.

This year she joined Brighton & Hove Albion after 17 years with the London club.

Reflecting upon her career and the decision to step away, Byrne said: “It can only be a positive thing to look back on how many caps I got and how long I got to play at the highest level whilst representing my country.

“I have made some great friendships along the way, learned a lot from so many people, and I always loved being involved with the Ireland team. Unfortunately we never managed to qualify for a major tournament - we went close against Iceland in a play-off - but I’ll treasure the memories and experiences of every time I played for Ireland.

“It’s a great achievement to step down having broken the all-time appearance record, but it’s time to give other girls an opportunity to stake their claim in the team. I’ll miss walking out to represent my country and all of the friends that I made, but I’m proud of my time with the team.”

Tony Fitzgerald, FAI President, hailed Byrne for her remarkable longevity at such a high level. “Emma has been a credit to women’s football for many years and she will be sadly missed as she prepares to hang up her gloves.

“To play for Ireland for such a long time and produce the type of performances that she did says a lot about Emma’s desire to represent her country. She was someone who young girls looked up to and she will forever be remembered as one of Irish football’s great servants.”

Colin Bell, Ireland WNT head coach, paid tribute to Byrne by saying: “I’d like to thank Emma for her professionalism and her contribution to the squad in the short time that I’ve been the Head Coach.

“Emma’s achievements at international level are rarely seen in the game and for her to represent her country over the course of 21 years is something most of us can only dream of.

“As we head into a new qualification campaign for the 2019 World Cup, I think the timing for her decision is correct. Going forward, Marie Hourihan will be the new No.1 but it’s important we continue to see Amanda Budden and Amanda McQuillan progress and challenge for that spot.”

1 Questions raised over Ireland v Italy fixture due to coronavirus
2 Panorama show Mo Farah changed account to anti-doping investigators
3 Six Nations: No place to hide for Ireland’s misfiring captain
4 ‘Ireland’s honeymoon period is over’ - buoyant English press reaction
5 All in the Game: how Firmino’s agent made him faster . . . on his laptop
Real news has value SUBSCRIBE
Crossword Get access to over 6,000 interactive crosswords