Striker?s goal 12 minutes from time enough to seal points at home to Bohemians 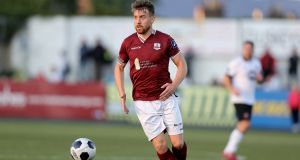 Galway United’s impressive start to the season continued at a windswept Eamonn Deacy Park on Saturday afternoon when Vinny Faherty’s goal 12 minutes from time was enough to seal a third win in five game for Tommy Dunne’s side.

Given the swirling wind coming off the Corrib, it always looked like one goal would decide the game, and on balance of play the home side probably just about deserved it.

It came in the 78th minute when Padraic Cunningham won possession on the left before crossing into the box, and a sliding Faherty just about got his studs to it to divert the ball past Dean Delany in the Bohemians goal.

The conditions made a passing game impossible for both sides and played havoc with any aerial ball, as was seen in the 12th minute when Lorcan Fitzgerald whipped in a corner which caught on the wind, but the ball hit the post with the United defence all at sea.

The home side did have the ball in the net seven minutes earlier, but Cunningham was offside when getting the final touch to Kilian Cantwell’s goal-bound header. Had the striker left it, the goal would have stood.

Ayman Ben Mohammad twice tested Conor Winn in the United goal in the first half, but the United goalkeeper was up to the task on both occasions; while at the other end, the only other real chance for United fell to their captain, Ryan Connolly, who created the space for a 20-yard shot midway through the first half, but the effort with his weaker right foot curled wide.

United improved in the second half when playing into the elements, and Delany had to be at his best to deny Faherty with a flying save in the 50th minute; the visitors also had a real let-off in the 63rd minute when Faherty was denied what looked to be a clear penalty.

The United striker did well to rob David Byrne before cutting into the box, where he looked to pick out the unmarked Cunningham, but while his pass clearly struck the arm of the covering Anto Murphy, referee Ray Matthews waved play on.

Bohs only had one real chance to equalise after Faherty’s strike, Fitzgerald’s run taking him past three United defenders, but the full back fired into the side netting from a narrow angle in injury-time.

1 FAI council member raises concerns about governance of organisation
2 Gerry Thornley: Stoppage could tip balance in favour of big money teams
3 Increase in membership a plus for adapting golf clubs
4 Ken Early: Why international football is fading into obscurity
5 ‘A radical departure’: Who are CVC and what are their plans for rugby?
Real news has value SUBSCRIBE