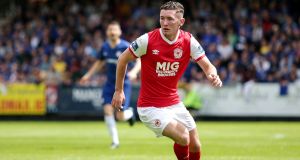 Derry City must secure at least a share of the spoils against Finn Harps in the north-west derby on Friday night if they are to secure Europa League football next season after St Patrick’s Athletic kept alive their hopes of taking fourth spot at the Brandywell on Tuesday thanks to two goals from super sub James Doona.

Doona’s brace keeps Stephen O’Donnell’s men in the hunt for Europe but they must defeat champions Dundalk at Oriel Park on Friday.

Derry had opened on the front foot, creating two clear-cut chances during the first 10 minutes.

A deep cross from David Parkhouse after just two minutes found the head of Ally Gilchrist at the back post but Pat’s goalkeeper Brendan Clarke did well to divert the effort over his crossbar.

Five minutes later Junior Ogedi-Uzokwe set up Parkhouse but his strike from just inside the box was charged down by a defender.

Pat’s appeared to set up in defensive mode, but keen to use the pace of ex-Derry winger Ronan Hale when hitting on the break.

However having settled, St Pat’s began to grow in confidence and started to penetrate the home defence, but their recent disappointment in front of goal continued as home goalkeeper Peter Cherrie was rarely threatened.

Facing the wind following the change of ends, Derry finally got the break and moved into the driving seat following a superb break on the counterattack in the 52nd minute.

Ciarán Coll raced forward from his full back defensive duties and with Parkhouse keeping pace with the defender, the Donegal man unselfishly laid the ball square, presenting Derry’s top scorer with a simple tap-in from close range.

But Pat’s refused to give up and having continued to push they deservedly restored equality in the 61st minute.

Having worked the ball into the penalty area, the home defence failed to adequately clear the danger and when a loose Greg Sloggett clearance found its way into the path of Chris Forrester, he duly drilled the ball low into the corner.

Derry’s hopes of Europa League football then suffered a blow when the Dubliners broke in the 79th minute with recently introduced sub Doona causing havoc.

Doona raced clear of the home defence to guide the ball into the Derry net from 20 yards to stun the home faithful.

And just to make matters worse, Doona used his pace to great effect yet again when racing into a one-on-one situation with Cherrie and the youngster made no mistake in the 84th minute.

And the Derry can have no complaints with the defeat but they do have the opportunity to secure European football when hosting Finn Harps this Friday night.