Team needs to up their away game, says manager 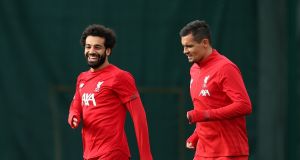 Jürgen Klopp has warned Liverpool must improve away from Anfield in the Champions League group phase, as there will be no repeat of last season’s “lucky” qualification for the knockout stage.

The European champions visit Belgian champions Genk on Wednesday seeking a first away win in the group stage of the competition for over two years. Liverpool’s last group away win was the 7-0 defeat of Maribor in October 2017, their only victory in the last 10 such outings, while their last four trips at this stage have all ended in defeat.

Last season’s setbacks counted for nothing as Liverpool lifted the European Cup for a sixth time having pipped Napoli to a place in the knockout stages. Klopp, however, is adamant Liverpool will not survive a repeat this season and must leave Belgium with maximum points.

The Liverpool manager, who has Mohamed Salah available after injury but has lost Trent Alexander-Arnold to illness and Joel Matip with a knee problem, explained: “Last year we were lucky with how tight the group was that we could lose three times away and still have a chance to make it through the group. That will not happen this year. It’s completely different.

It’s tough, with a lot of international games as well, so it’s hard to get that rhythm, but we haven’t been good enough away from home

“We don’t rely on home games. Obviously we like to say European nights at Anfield are really special, but other teams can make a special atmosphere as well. They are not all the same – we could have won away games, to be honest, performance-wise, which we didn’t win for some reason. We know it’s not historically good what we have done in the last few years, but in general the Champions League was obviously really good. We did the right things in the right moment but we don’t rely on these things. We know we have to improve and we try again and again until it works out.”

Liverpool did win at Bayern Munich and Porto en route to winning the Champions League in Madrid last season, and James Milner believes the fixture schedule at this stage of the season could impact on performances in the group.

“There’s a lot of games around this period,” the midfielder said. “It’s tough, with a lot of international games as well, so it’s hard to get that rhythm, but we haven’t been good enough away from home. We have to be better. We have had some good results away as well – Bayern Munich stands out as a massive win against one of the best teams in Europe.”

Champions League victory, 97 points in the Premier League and an unbeaten start to this season’s title challenge has seen seven Liverpool players nominated for this year’s Ballon d’Or, more than any other team. Barcelona and Real Madrid players have dominated the award over the past two decades and Klopp believes this year’s nominations are another sign that this Liverpool team can remain together for several years.

Mo looks promising. Yesterday we were not sure but today it looked much better. We have to see how he reacts overnight

“I heard we had seven nominees and my first question was: ‘Who is not nominated?’,” the Liverpool manager said. “It is a very good sign and, after last season and how we played, it is normal that a lot of players have to be nominated if there are football experts. To be honest I was surprised when I was at the other [Fifa] awards that no player from Man City was in that team because we all know they play really good football.

“Our seven players are all deserved. If it is a sign that we are a destination now, I do not know. We will see. It looks like we are comfortable with each other. We want to work together for the next couple of years together or more but we will see what the future brings.”

Genk are currently sixth in the Belgian top flight but are unbeaten in their last six home matches in the Champions League, qualifiers included. Salah is available having missed Sunday’s draw at Manchester United with an ankle problem. Klopp said: “Mo looks promising. Yesterday we were not sure but today it looked much better. We have to see how he reacts overnight. We will not risk anyone. Trent, I hope he is available for the weekend. Nobody told me anything different. Joel is the same thing as before the Man United game. We thought the two weeks would be enough and it would settle. It’s not a serious thing but it is serious enough that he is not available tomorrow.”