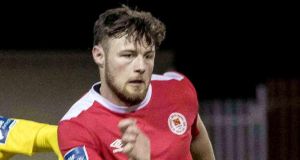 Josh O’Hanlon scored with his first touch as St Patrick’s Athletic came from behind against 10-man Shamrock Rovers to get their first win of the season and lift themselves off the foot of the Premier Division table.

Rovers started the better in the bright sunshine with St Pat’s right back Michael Barker getting his body in the way to deflect a James Doona shot out for a corner before the visitors’ early pressure told on 13 minute with their deserved lead.

Left back Seán Heaney’s powerful first-time drive from distance was parried away by St Pat’s goalkeeper Conor O’Malley. Doona was first to the loose ball to cross low to give Gary Shaw a simple tap-in for his third goal of the season.

Conan Byrne sliced wide for St Pat’s following a fine diagonal ball from JJ Lunney as the home side laboured to get into the game.

But further frantic defending at the other end was soon needed to snuff out a Rovers attack as Patrick Cregg bravely blocked a stinging volley from Rovers captain Ronan Finn.

There was plenty of bite in this derby with St Pat’s’ Gavin Peers and Graham Kelly booked before Rovers’ Heaney also shipped a yellow card on the half hour mark. Four minutes later the defender was off for a second offence after a foul on Byrne.

That changed the dynamic of the game giving St Pat’s the impetus to press for an equaliser before half-time.

And but for the save of the game it would have arrived on 42 minutes; Rovers’ goalkeeper Tomer Chencinski diving full length to his left to push away Byrne’s crisply hit free kick.

The introduction of Kurtis Byrne finally worked the oracle for St Pat’s as they levelled on 59 minutes.

The impressive Lunney’s ball in from the right was hooked home by the substitute with an instinctive volley from close range.

Fellow substitute O’Hanlon then won it for St Pat’s on 76 minutes, heading home a Conan Byrne corner seconds after coming on.