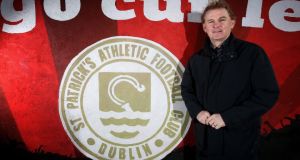 St Patrick’s Athletic manager Liam Buckley is hoping to lead his side to the Premier Division title this weekend. Photo: Dan Sheridan/Inpho

Precisely a year later to the day, Conor Kenna is looking forward to a reversal of fortune as he hopes to witness the ecstatic scenes of the Sligo Showgrounds replicated by St Patrick’s Athletic at Richmond Park tomorrow evening.

Last October 13th, the St Patrick’s captain conceded the late penalty from a harshly adjudged handball which Mark Quigley duly dispatched to give Sligo Rovers a 3-2 win which clinched their first title in 35 years.

Liam Buckley’s St Patrick’s face a similar scenario as they hope to seal the deal on an eighth championship – and first since 1999 – when the holders visit what should be a packed Inchicore venue.

“Last season down there was brilliant,” recalled Kenna of the atmosphere in Sligo. “It was a great occasion for the league. The stadium was brilliant; the way it was set up, the fans, the pitch and it was a great game as well.

“It was great for them to win the league that day so hopefully we can do that (tomorrow) and pay them back.”

Should second-placed Dundalk not win at Bohemians tonight, St Patrick’s, currently six points clear, can confirm the title with a victory. But given their far superior goal difference of 17, beating Sligo will effectively be enough, regardless of Dundalk’s result.

Reigning champions
Beside St Patrick’s will still have two games (home to Derry City and away to Cork City) to come. But doing it against the reigning champions at home will be by far the sweetest conclusion.

“We’ve three chances and we want to finish it as soon as we can, so it would be great to do it at home,” added central defender Kenna.

With key midfielder Killian Brennan and striker Daryl Kavanagh back from suspension, Buckley has a full squad to pick from.

“The outcome of the title race is not in our hands,” said Sligo manager Ian Baraclough, whose side are seven points behind in third place.

“We feel we are still in this race and our intention is to keep it that way. There is an excellent mood in the camp. This game has a lot of hype surrounding it a year on from when we beat St Pat’s. But our only ambition is to win the game to keep our hopes alive.”

Central defender Gavin Peers returns from a ban while both winger Ross Gaynor and striker David McMillan are back in contention following injury and ineligibility respectively to give Baraclough a full squad for the first time this season.

Should Bohemians at least match Bray Wanderers’ result against Limerick on Sunday they will be safe from a relegation play-off place.

Third-bottom UCD can all but assuage the threat of relegation with a win at cup finalists Drogheda United.

Shamrock Rovers are without the suspended Conor McCormack as they travel to Derry City. Derry, three points ahead of Rovers in fourth place, remain without the injured Stewart Greacen, Kevin Deery and Thomas Crawley while winger Patrick Kavanagh is a doubt with an ankle injury. Central defender Ryan McBride is suspended.

Bray Wanderers will come off the foot of the table with a result at home to in-form Limerick tomorrow afternoon. Goalkeeper Darren Quigley returns having missed last week’s defeat at Shamrock Rovers with a knee injury as manager Pat Devlin adds Dwayne Wilson, Eoin Hyland, Peter Thomas and Ian Cowser to his squad.