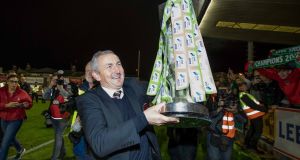 History may ultimately judge it to have been otherwise but in the here and now the rivalry between Cork City and Dundalk certainly feels like something special. Having just finished a fourth straight league campaign as the Premier Division’s top two sides, on Sunday at 3.30pm John Caulfield and Stephen Kenny go head to head in a third successive cup final.

The southerners, it has been fairly plain to see, have been enjoying finally having the upper hand and, after claiming that the tide started to turn when Seán Maguire scored his side’s late winner at the Aviva last season, Caulfield might want to win this one as much to deprive his opposite number of a similar opportunity now as for the little bit of history he would write by becoming the first manager to lead City to the double.

“Ultimately for us, it was all about the league,” says the former striker who suggests the particular intensity of the games between these two is what tends to make them so special. “So, are we under the pressure that we were last year? Not at all, because we’ve already won the league and qualified for the Champions League. That’s what we wanted. The cup,” he concludes, “has just been a bonus.”

Still, winning it last year, he believes, played an important part in keeping Maguire at the club for the first half of this season along with everything else that has flowed since, and both sides will take what they can get when it comes to persuading players to stay or join for next season.

Positioning is already well advanced at both clubs, with one or two of the prospective moves even having the potential to cast a bit of a shadow over Sunday’s team selections. Karl Sheppard is, most obviously, widely believed to be on the way to Oriel Park in the winter, with Ronan Murray expected to replace him.

David McMillan may well head to Scotland while Kenny says he is still hoping to keep Niclas Vemmelund at the club despite it being the central defender’s stated intention to leave. “You never know with these things,” says the Dundalk boss, “but Denmark is his home, his girlfriend is there and these things are all a factor. Home is calling him.” Well, there and Rosenborg, it seems..

Kenny, who has Steven Kinsella out, John Mountney coming back and Chris Shields battling to prove he is capable of playing a part, acknowledges that City have had a good year and that that makes tomorrow a big day of a slightly different kind for his players.

“We had the upper hand, winning the league here in 2014, that big epic finale; then winning the double in 2015, last year winning the big game here to win the league with Daryl Horgan’s two brilliant goals. This year has been different. They have taken seven from nine in the three games and we haven’t beaten Cork this year, so it’s a big challenge for us.”

It is not, he insists, about him and Caulfield, though. “No, I don’t look at is as an individual managerial rivalry thing, it’s about raising standards. They’ve pushed us the last few years, there’s been some great matches and this season, obviously, they’ve been successful. Now we’ve got to go again. That’s the nature of sport.”

He greets a question about whether a close personal bond has developed between the pair of them along the way with a look of complete bewilderment. “Not really,” says Kenny, whose family is still based in Donegal. “We’re at opposite ends of the country. It’s a Malin Head and Mizen Head sort of situation. We could go on that cycle.”

1 Six Nations: Ireland are contenders but England still the team to beat
2 Limerick roar from behind to sink Tipp and start league in style
3 Mike Catt hopes to have Irish backs purring in Six Nations
4 Owen Doyle: Creeping professionalism of schools rugby a threat to the game
5 GAA officials and referees brace themselves as new rules kick in, and this time it's for real
Real news has value SUBSCRIBE