Elite sides may be improving in attack but defending is forgotten 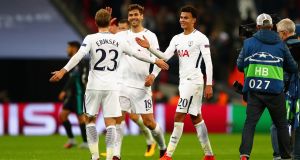 It was one of the greatest nights in Tottenham’s history. It was better than beating Internazionale 3-1, probably the equal of those fraught nights in 1983-84 when Bayern Munich, Austria Vienna, Hajduk Split and Anderlecht were overcome on the way to the Uefa Cup.

Almost whatever happens over the next three decades, it’s safe to assume that in 2050 Christian Eriksen’s goal will still be included in the pre-match White Hart Lane montage as Danny Blanchflower’s voice, the crackle of time even more pronounced, explains once again that the game is about glory.

And this was glorious.

That hints at a wider point, which is that Madrid were weirdly terrible. That’s not to diminish Tottenham’s performance, and it’s hugely to their credit that they have adapted their game this season to such an extent that their best three performances – against Borussia Dortmund, Liverpool and Madrid – have come when they had only around a third of possession, but it is to ask questions about Zinedine Zidane and perhaps the nature of elite football in general.

Nine years ago the former Liverpool midfielder Igor Biscan spoke about the problem clubs such as Dinamo Zagreb have, explaining how they dominated to such an extent domestically that they wilted as soon as they meet a side of even vaguely comparable quality in Europe. They had forgotten how to defend and they had forgotten how to fight.

Football became for their players an exhibition, the sense that you might have to struggle before you could express yourself was gone.

Since then the economics of football have meant that more and more teams have found themselves succumbing to the Biscan Principle. Bayern are now laughably dominant in the Bundesliga. Juventus may be facing more of a challenge this season than in recent years but they’ve won Serie A six times in a row.

PSG were so upset when their run of four straight French league titles came to an end last season that they went and arranged the two most expensive transfers in history; their only rival, meanwhile, lost four key players. Barcelona and Real Madrid dwarf the rest in Spain.

The result is a decadence among many of the leading sides, a focus on only one part of the game. As Tony Evans pointed out on the Second Captains podcast this week, fans have come to expect and demand entertainment and for some that has become a surrogate for winning. In practical terms, on the pitch, what it means is that elite sides have softer underbellies than they’ve ever had before. Genuine opposition is such a rarity that when they meet it they have no idea how to react.

That’s why so many games between ostensibly well-matched elite sides end up with a surprisingly large margin of victory. The Barcelona-PSG last-16 tie last season – 4-0 to PSG in the first leg; 6-1 to Barca in the second – was the perfect example of that.

It was thrilling, of course, but it was essentially two big men taking it in turns to hit a blancmange with an axe. Barcelona, it will be remembered, rapidly succumbed to a better-balanced Juventus in the following round.

In the past eight seasons, 21 games at the quarter-final stage or later of the Champions League have been won by a three-goal margin; in the eight seasons before that there were only eight.

Top sides, the elite who reach those stages of the competition, may be better than their forebears at attacking but the art of defending is being forgotten. There is too much attention on the glister of glory, and not enough on the guts.

The one major league that is not yet subject to the Biscan Principle is the Premier League. It’s not just that six sides began this season with at least vaguely realistic title ambitions, it’s that the bottom sides are still wealthy enough to compete – which is why the attempts of the “Big Six” to hive off more of the overseas television rights must continue to be resisted.

For the past few years English underperformance in Europe has been blamed on that competitiveness, on, as Louis van Gaal had it, the “rat race” of the English game. This season, although it’s still early, the signs are that Premier League sides may be benefiting. Premier League sides have lost only one of 20 Champions League games this season, have collected 40 per cent more coefficient points than any other league and, perhaps most impressively, have shown an intelligence and a tactical flexibility perhaps lacking in the past.

Mauricio Pochettino tweaked again, shifting from the 3-5-2 he had used in the Bernabeu to a 3-4-2-1. Madrid’s 4-3-1-2 shape demands the full-backs get forward to offer attacking width; Tottenham were merciless in exposing that, leading directly to the opening goal.

Rabble at the back

Madrid were limp, lazy and disorganised, still a threat going forward but a rabble at the back. Perhaps they were infected by the realisation that they’ll almost certainly qualify anyway, and that they won the competition after going through in second last season. But after their sluggish start to the domestic season there is reason for serious concern.

After successive defeats, Tottenham sides of the past might have wilted but not this one. Mentally they were tougher than Madrid and tactically they were smarter. Wednesday was a night that will live always in Tottenham’s history but it should also be a warning to Madrid and perhaps also the other super-clubs. Guardian Service

5 Fabien Galthié cleared of any wrongdoing for leaving bubble