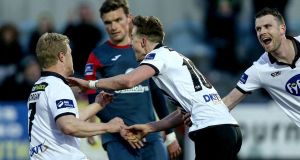 Dundalk moved three points clear at the top of the SSE Airtricity League table thanks to Ronan Finn’s 44th-minute penalty against Sligo Rovers at Oriel Park.

Finn’s spot kick, coming just six days after a hat-trick in Longford, propels the champions clear of Derry City and St Patrick’s Athletic at the summit.

The Lilywhites endured a frustrating first half as Dave Robertson’s Sligo side kept their shape well and gave very little away.

Ciaran Kilduff nipped in ahead of the advancing Micheál Schlingermann to toe poke Brian Gartland’s pass off target in the 14th minute before heading a Daryl Horgan cross against the post. The assistant’s raised flag would have saw the goal ruled out in any event.

Kilduff was involved again in the 25th minute, his chest control inviting David McMillan to strike but he blazed the effort over the top.

The visitors’ only real attempt came on the quarter of an hour mark when Kieran Sadlier’s 25-yard free-kick saw Gary Rogers scramble to his right to ensure the effort went wide of the post.

It looked like the Bit O’Red’s discipline would get them into the dressing room all square at the break but that all changed on the stroke of half-time when referee Ben Connolly adjudged Mick Leahy to have hauled Gartland to the deck from a Darren Meenan corner and Finn made no mistake from 12 yards.

Sadlier tested Rogers with a snapshot in the 47th minute before Liam Martin picked Jimmy Keohane out from the left, the former Woking man diverting his attempt just wide of the upright.

Dundalk struggled to get into first gear and it took until the 71st minute for them to really trouble Schlingermann for the first time in the second half. Toby Adebayo-Rowling's handball on the edge of the box allowed Horgan the opportunity to curl a wicked free just over the top.

Liam Buckley’s side were ahead on six minutes from their first incisive attack of the game. The marking was negligent as Mark Timlin rose at the back post to head home Byrne’s floated cross from the right.

In a dynamic opening to the game, Youths were unfortunate not to be level three minutes later.

Paul Murphy released fellow striker Danny Furlong on the right and his shot came back off the inside of Brendan Clarke’s right-hand post.

A minute after that, further dubious defending cost Wexford a second goal. Timlin worked a trick on the left to cross for Christy Fagan, again unattended in the area. And the newly crowned player of the month was given far too much time and space to cleverly control the ball before volleying to the net for his sixth strike of the season.

Wexford remained at sixes-and-sevens defensively as a mistake by Ryan Delaney presented Byrne with an opening which saw the winger arc a shot over the top.

But the pressure on the visitors’ goal soon resumed. Fagan had a shot bravely blocked by Stephen Last before St Patrick’s extended their lead on 32 minutes.

Billy Dennehy’s shot deflected off a defender to fall invitingly for Byrne who found the near top corner of Graham Doyle’s net with a stunning right-foot volley.

Byrne scored his second of the night on 57 minutes when finishing off the move of the match. Fagan sent Dennehy away on the left to cross low to the far post where Byrne arrived to sweep the ball past Doyle.

Bizarrely, before Youths could restart, striker Furlong ran straight off the field and down to the dressing rooms having been sent off, apparently for dissent.

The spoils were divided between the sides following a gripping game at Eamonn Deacy Park.

Gritty Galway shaded an eventful opening period which featured three goals with the rapidly improving Tribesmen thundering into the contest. Only five minutes had elapsed when Ryan Connolly’s precise cross was headed home by the in-form Vinny Faherty.

Cork, though, were back trading on terms in the 18th minute as Stephen Dooley wriggled clear to level with a smart strike.

A decent match was developing, but the locals were enthused again in the 35th minute with Cork left reflecting on a costly defensive lapse. Having failed to clear the danger adequately Cork were punished by a gorgeous Gary Shanahan finish from an acute angle.

In the 67th minute an Eoghan O’Connell attempt was deflected over for a corner which ultimately resulted in Cork’s second goal.

Dooley’s corner caused panic in the Galway six-yard box with defender Killian Cantwell, under pressure from O’Connell, putting the ball into his own net.

It was a thrilling tussle with Cork substitutes Mark O’Sullivan and Danny Morrissey going close before Galway replacement Padraic Cunningham struck the woodwork.

Finn Harps notched up their third home win in five outings as they just overcame Bray Wanderers in a tight affair at a damp Finn Park.

Harps went into the game hoping to bounce back from two straight defeats and knowing that a win over Bray would give them a six-point cushion over the Wicklow side in this early season bottom half of the table six-pointer.

Bray had an early penalty claim dismissed when Dylan Connolly went down in the box under pressure from Packie Mailey.

Harps then took the lead on seven minutes with David Scully steering the ball into the net against one of his former clubs after a good build-up involving Seán Houston and Ryan Curran.

Bray battled to get back into the game before the break but Harps always looked sharp in attack with the inspirational Houston driving forward with menace from midfield to instigate several moves of note.

Bray produced several probing crosses from the flanks into the box but clear cut chances were largely restricted.

The visitors had the better of the second half and went close on 70 minutes when Andrew Lewis’s lob beat Brush but fell just to the left of the target while moments later Conor Kenna fired wide from a good position.

Bray will feel that they deserved a point but Ollie Horgan’s side held on for a win that lifts them above Bohs into seventh spot.