‘I need to listen to my body’ - Bohemians' Shane Supple retires 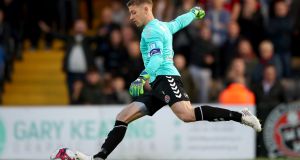 Bohemians goalkeeper Shane Supple has been forced to retire from soccer with a hip injury that, he says, would prevent him playing to “the level needed and, more importantly, that I expect of myself”.

Supple, who signed for the Dublin club three years ago following a prolonged break from the senior game, had been named in this season’s PFAI Team of the Year after what was another outstanding campaign for the club.

In June he had been called into the senior international squad for the friendly games against France and the USA although his subsequent comments in an interview regarding how pandered the players were annoyed manager Martin O’Neill and pretty much ensured that the opportunity would not arise again.

The remarks, though, closely reflected the views that had prompted him to walk away from Ipswich nine years ago when he became disillusioned with the professional game and opted to return home and concentrate for a time on playing gaelic football. Within a year of so, he was in the Dublin senior panel.

After returning to amateur soccer then signing for Boehmians he had plenty of options ahead of the 2017 season but chose to stay at Dalymount Park where he became a firm favourite. The club has just signed James Talbot who has spent the last few years at Sunderland. Former Celtic underage goalkeeper Colin McCabe is also at the club.

“I need to listen to my body and can no longer put it through the high level of physical demand required at this level of competition as a goalkeeper in the League of Ireland,” said Supple in a statement issued through the club..

“I had envisaged playing long into my 30s and had intended doing that with Bohs - a club that has been so good to me and has given me the most enjoyable years of my playing career. Sport has given me so much enjoyment from as long as I can remember up to my last game in Dalymount at the end of this season. I can look back on my career with no regrets and an awful lot of fond memories.

“I will miss Friday nights in Dalymount the most, the atmosphere created by the best fans in the world with the flares, banners and Johnny Logan’s ‘Hold Me Now’. Nothing will replace that!”