First leg of final of Copa Libertadores postponed due to rain 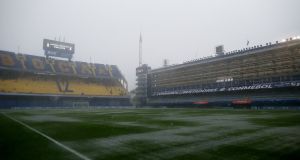 A view of the stadium in Buenos Aires on Saturday. Photograph: Agustin Marcarian/Reuters

The final of the Copa Libertadores, the first in history between Argentina’s two biggest clubs Boca Juniors and River Plate, was postponed for one day on Saturday due to heavy rain, the South American Football Confederation said.

The match, due to played at Boca’s Bombonera ground, will now take place on Sunday, kicking off 5pm local time.

Torrential rain hit the Buenos Aires area throughout Friday and Saturday and the pitch was waterlogged and unplayable, officials ruled.

Photographs showed the playing surface covered in pools of water as the rain continued to fall just a couple of hours before the scheduled 4pm kick off time.

The sold-out fixture is one of the most eagerly anticipated finals in the competition’s history, pitting the two rivals against each other in the final for the first time.

1 Solskjær praises Martial for building himself into ‘powerhouse’ centre forward
2 No final round heroics for Rory McIlroy at US PGA
3 Angling Notes: Mutilated skate baffles experienced anglers
4 Andy Sullivan fights back tears as he wins English Championship
5 When Ali came to Ireland
Real news has value SUBSCRIBE
Crossword Get access to over 6,000 interactive crosswords