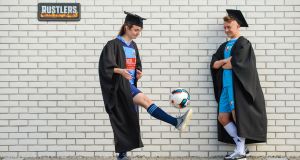 Dearaibhle Beirne of UCD and Darragh Markey of Maynooth University in attendance during the Rustlers FAI Colleges and Universities launch at the FAI HQ in Abbotstown. Photograph: Cody Glenn/Sportsfile

Pat Fenlon believes that colleges football’s ability to complement the youth development work being done by League of Ireland clubs, while also providing young players with a fall-back plan, has helped has played a major part in its continued growth with Waterford FC among the latest to get involved in third-level scholarship schemes.

The former Shelbourne, Bohemians and Shamrock Rovers boss admits that Irish clubs have let a portion of their players down over the years by not doing more to help them provide for a future outside of the game but that, he says, is changing as all sides come to appreciate how limited the opportunities within football are here and how important it is to get into the game equipped with a Plan B.

“I think there has to be more emphasis on looking after them outside of the game,” he said while attending the launch of the Colleges and Universities competitions for the coming season on Wednesday in Abbotstown where fast food producer Rustlers was unveiled as the new main sponsor.

“Obviously when you manage them, you want the best players to play football and later you take pride when you look back at the lads who maybe went away and did great. But there are the other lads as well; lads who might be struggling a little bit and if you’ve put them through the education system, then at least you know that they have a bit more of a chance if it doesn’t work out for them.

“On a personal level that has to be a plus; that you’ve done a bit more than just tried to develop them as a footballer but it helps when you’re talking to a player or his parents these days too because there is a growing awareness of the possibilities for further education and people know that players can’t make enough money in the league here to sustain them for the rest of their life.”

Fenlon admits to having missed out on a number of players to UCD when he tried to sign them for the likes of Bohemians and Shelbourne. “I remember I tried to sign Ronan Finn but he was adamant that he wanted to continue his studies. He was right as things turn out.”

His current club has partnered for the coming academic year with Waterford Institute of Technology and while there are initially only two players – the Martin brothers John and Paul – on scholarships, Fenlon is hopeful that the scheme will steadily expand as both sides get to grips with the accommodations required to ensure everyone ends up benefiting.

“It’s a difficult one where it is at the moment because it’s the off season and so you are weighing up whether a player might be getting too much football so it needs to be a good relationship between the club and the college.

“Taking John, for instance, he has played a lot of games at this stage in the Waterford first team and he needs to develop physically during the off season. Him being at college is a big help because they have all the facilities but then they also want him to play for them and train for them obviously enough. So there has to be a balance struck where you are developing the player, not flogging him, and he is progressing physically and tactically and educationally.

“But it’s the first year and we have both made a commitment to it all so it’s just a question of figuring out what works best for everyone involved. We have seven or eight other lads up there in the college who are not on scholarships and we are training on the grounds a bit too so it’s a good thing for us and I think it’s important if you want to build a better relationship with the people in the area.”

The colleges season, which involved 29 competitions last year ranging from leagues for both men and women pitched at different levels, to longer standing cups like the Collingwood, kicks off in a couple of weeks.

The expectation is that there will be more than the 88 League of Ireland players who featured last season involved around the country when all of the first-year registrations are completed. A number of senior women’s internationals also represent colleges.